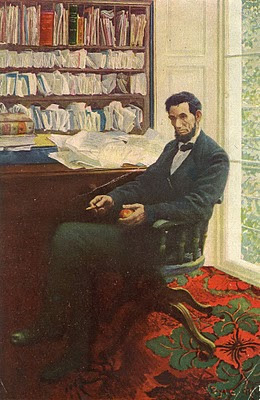 On this day 150 years ago - February 21, 1861 - President-elect Abraham Lincoln arrived in Philadelphia en (circuitous) route to Washington, D.C.. After a 34-gun salute, he rode from the depot in an open barouche pulled by four white horses to the Continental Hotel as anywhere from 100,000 to a quarter of a million people cheered him on. Mrs. Margaret C. Pyle was one of the onlookers, having come up from Wilmington, Delaware, at the invitation of a friend.

Some 46 years later, Mrs. Pyle’s son Howard painted this illustration for “Lincoln’s Last Day” by William H. Crook (Harper’s Monthly Magazine, September 1907). During a visit to the studio, Mrs. Anna Roosevelt Cowles got to see the original oil on canvas, and Pyle reported to her younger brother, Theodore Roosevelt:


She appeared to be moved by the pathos of the image which I had attempted to depict, and I told her then that the inspiration of your tireless and energetic struggle for the benefit of a great people had had a large, if not a dominant, influence upon my presenting the picture of your great fellow-president.

You also will always be remembered as one who has given the best efforts of his life to the combatting of a gigantic evil and for the preservation of the best interests, and the enlargement of the future happiness of his fellow men.

The painting was subsequently sold in Chicago - possibly at an exhibition of Pyle’s works at Marshall Field & Company in December 1909 - and hasn’t been seen in public since then.
Posted by Ian Schoenherr at 7:12 PM

I get a sense that this is/was a much more powerful and moving painting than the old timey reproduction gives it credit for.

I agree - and I hope the original turns up one of these days - I think it was last exhibited in public over 100 years ago.

True story: Walt used this image to represent Pyle in his first edition of The Illustrator in America (1966), and he did it by borrowing the four zinc halftone plates (that Harper's had made in 1907) from Helen Card and handing them over to Reinhold Press saying, here, use these, which they somehow did. So, literally, it's the selfsame "old-timey reproduction" in which you can spot hand-etching of the halftone dots in the highlights.
— Roger Reed

I found this original paintingggggggg :) :)

For real? Tell me more. I understand it was sold in Chicago, but I don’t know to whom.