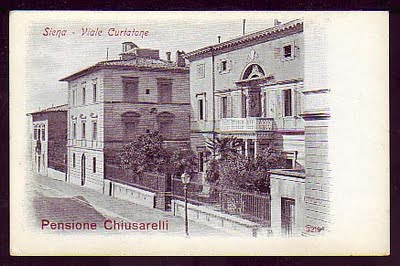 On September 9, 1911, Howard Pyle’s sons Theodore (22) and Howard Jr. (20) sailed on the S. S. Canopic from Genoa, Italy, bound for Boston and, ultimately, their fall semester at Yale. The next day, apparently, his sons Godfrey (15) and Wilfrid (13) took the train up to their school near Lausanne, Switzerland. “We shall be cut down then to the feminine skeleton of our family,” Pyle had said colorfully, if not a little morbidly, in anticipation of their departure.

A few days later - perhaps even one hundred years ago today! - Pyle and his wife, Anne, and their daughters Phoebe (24) and Eleanor (17), and his secretary, Gertrude Brincklé, went to Siena for a two-week stay at the Pensione Chiusarelli - seen here in a postcard of that vintage. (The place, by the way, is now the newly restored, three-star Hotel Chiusarelli - in case you’d like to sleep there, too.)

It was a welcome change for Pyle, who had grown to despise his summer residence, the Villa Torricella, in the hills above Florence. “It was more nasty than I can make you understand,” he said in a letter to Stanley Arthurs, after itemizing the “great high walls” surrounding it and the “very rough and very steep” roads to it that “were so filthy that you had to keep your eyes straight before you so as to see where you stepped,” as well as the long stretch of hot, dry weather and his own bouts of “sickness and blues.” In fact, Pyle confided, “I would rather have ever so sharp an illness than such dreadful mental depression as overwhelmed me.” In escaping to Siena, however, the family “all became prosperous and happy again.”
Posted by Ian Schoenherr at 7:26 PM