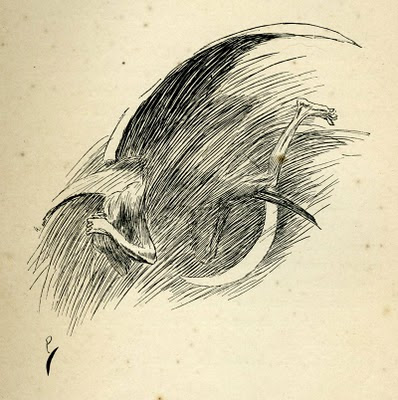 I was just looking through Howard Pyle’s under-appreciated book of fairy tales, Twilight Land, and came across this picture: the untitled tailpiece for “Woman’s Wit” - which originally appeared in Harper’s Young People for July 29, 1890. It shows a despairing Demon howling, “I am conquered! I am conquered!” and “bellowing so dreadfully that all the world trembled.”

It’s hard to see much “classic” Pyle in this scratchy, vigorous (and beautiful) pen and ink - it’s a world away from his deliberate, Düreresque drawings for Otto of the Silver Hand, which he made only two years earlier. It reminds me more of... Heinrich Kley?
Posted by Ian Schoenherr at 6:53 PM

I wonder if he was looking at Zorn's etchings and pen-and-inks. I love the way Zorn dissolved form and created atmosphere with his hatchings. I assume that Zorn's name would have come up a lot at the Tile Club.

So far, no Zorn references in Pyle’s letters, etc., but that doesn’t mean Pyle wasn’t aware of his work. And although Pyle didn’t belong to the Tile Club, he was acquainted with many of the members, so there’s a good chance Zorn’s name came up in one conversation or another. I’ll keep an eye out for any hints.