A Lost and Found Pyle

With the exception of sketches, doodles, and embellished inscriptions in books, the bulk of Howard Pyle’s pictures have been published at one time or another, so “lost” ones of any importance are exceedingly rare. But I just found one.

After my Cass Gilbert post, I was looking around for information about his house in Ridgefield, Connecticut. In a letter of August 28, 1907, to Pyle, Gilbert wrote that he had just bought the property. “It was an old tavern in the revolutionary time and is really a charming little place,” he said, adding that he didn’t plan to alter it, only repair it and restore the garden to the way it had been in the 1700s. “It is just the sort of thing that you would like, and we have said again and again that if we can get you, we want you to come there and visit us just as soon as we can give decent accommodations to a guest.”

I don’t yet know if Pyle took up Gilbert’s offer, but the place has since become the Keeler Tavern Museum & Garden House. And on one of the pages of their website I was surprised to see this tiny reproduction of a picture of Cass’s wife, Julia Finch Gilbert.

Some years ago, the Gilberts’ granddaughter gave the 28.5 x 34.5" portrait to the museum, where it now hangs in the Cass Gilbert Dining Room. The museum informed me that “We were told Mrs. Gilbert did not like the way her hands looked in the painting so the lower part of the portrait was cut off along with the artist's signature.” But surely this is Howard Pyle’s work.

Fortunately, there’s documentation to prove it. That which I’ve been able to read (so far) suggests that Pyle started the painting sometime in 1908, when, perhaps, the Pyle-Gilbert friendship was at its most intimate. Cass Gilbert said in a December 22nd letter of that year:


I am tremendously interested in the outcome of the portrait. Mrs. Gilbert tells me that you expect her to come down again for a day some time in the near future, just when I do not know, and that after that my curiosity may be satisfied but not until then.

But Pyle seems to have let it slide: in a letter of March 22, 1910, Gilbert begged, “I do wish you would send me the portrait just as it is and some time when you can come and visit us for a week or two you can touch it up. It must not be allowed to interfere with your work...” He pointed out that the “limitations of Mrs. Gilbert’s wardrobe are such that I think she feels the lack of a hat and gown which she left in Wilmington” - and he asked Pyle to return them.

Drawing from letters I haven’t yet looked at, the new Pyle biography also discusses the portrait and indicates that the plan was for Pyle to paint it “for a commission determined by [Mrs. Pyle and Mrs. Gilbert]”:


Ever generous, Pyle said he preferred doing the work for free. Insecure about his abilities at portraiture, Pyle complained that he was unaccustomed to the genre. Once the portrait was completed, Pyle felt he might not have captured Mrs. Gilbert’s likeness, telling her husband she was “really a very difficult subject to paint.” Self-effacingly, Pyle suggested Gilbert destroy it if it was unsatisfactory and “get some better fellow” to undertake another painting.

Needless to say, I’d been wondering where the picture was since first reading about it in Gilbert’s letters some 15 or so years ago. But I had no luck in trying to track it down. I also had no clue as to what it would look like: Pyle really wasn’t a portrait painter, and his self-portrait of 1906 (at the National Academy of Design) isn’t particularly notable. This painting, however, is great. It’s so much better, stronger, and more interesting than I thought it would be. And even if it was, indeed, cut down, it still works. Pyle’s ever-inventive placement of bold colors and lights and darks is just terrific. I can’t wait to see it in person.

Incidentally, I showed it to one of Pyle’s great-granddaughters and her husband remarked that “Mrs Gilbert looks like a pirate!” She does bear a resemblance to this one - among others... 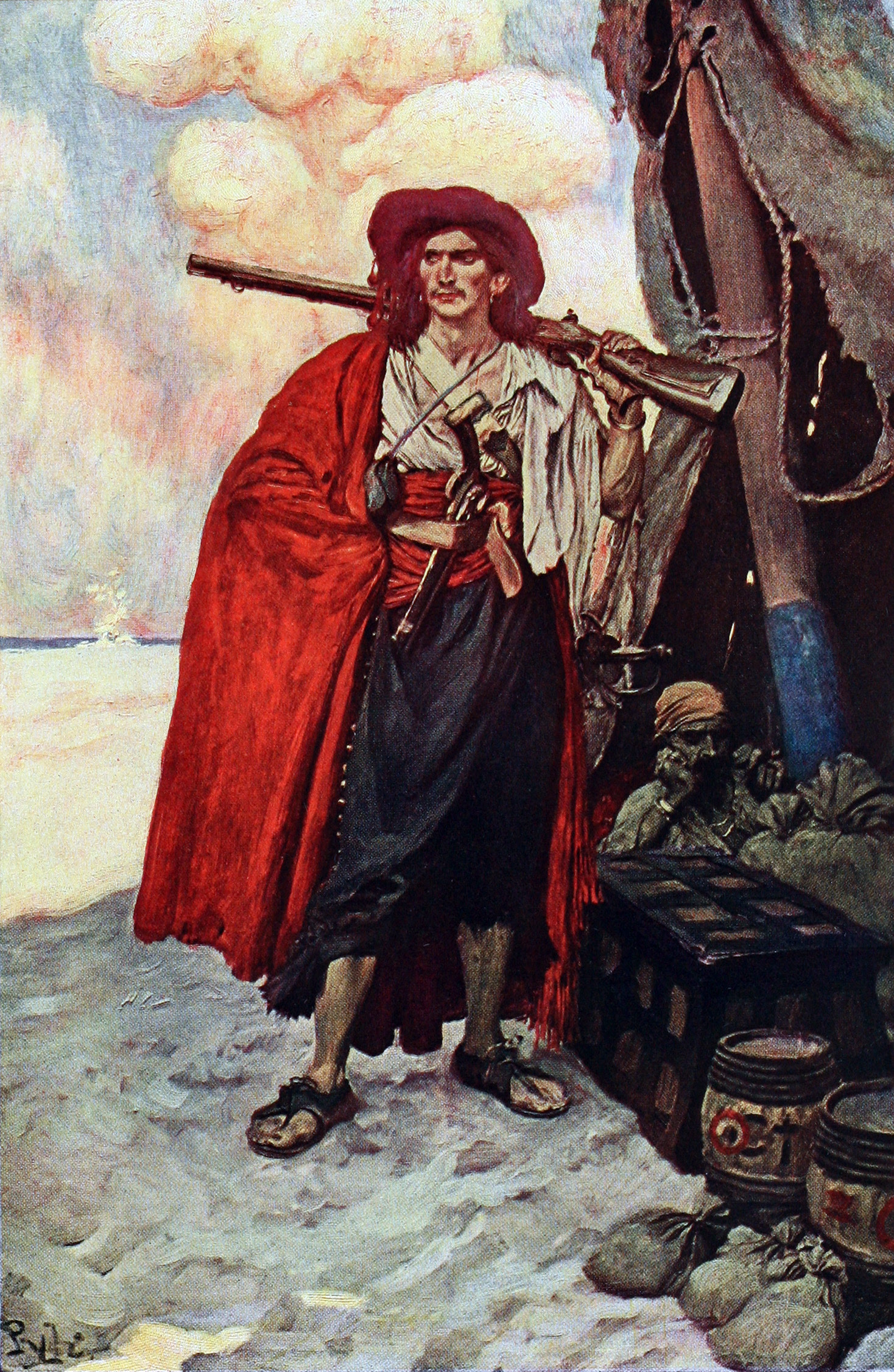 “The Buccaneer Was a Picturesque Fellow” by Howard Pyle (1905)
Posted by Ian Schoenherr at 10:14 AM

Excellent work putting the pieces together Ian. Thanks for sharing the story.