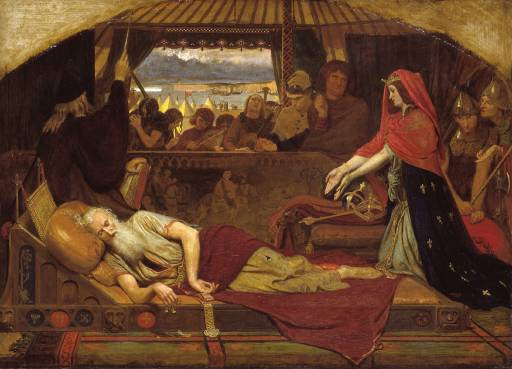 Despite his self-described “hermit-like” existence, Howard Pyle didn’t live in a vacuum, and one of the major points of the the new exhibit and book, Howard Pyle: American Master Rediscovered, is that his work was informed by myriad sources: from Winslow Homer to Japanese art to James Tissot to Walter Crane.

From his childhood, Pyle was also exposed to the Pre-Raphaelites: among other things, a print of William Holman Hunt’s “Light of the World” hung in the Pyle home as early as 1861 (and one is featured in the show, next to Pyle’s similar “The Closed Door”) and books illustrated by John Everett Millais were in the family’s library. And he often discussed them in his lectures. On November 21, 1904, for instance, he mentioned Ford Madox Brown’s “Lear and Cordelia” to his students:


I would like you to see Ford Madox Brown’s picture of Lear and Cordelia. Lear is half-lying back on his throne, looking like an old lion with his white beard and around are gathered all the courtiers. Some of them are in front of the others so that, perhaps, a part of a face is hidden but it looks right, as it is that way in a crowd. The faces and parts of faces are so strong in character that they might be faithful portraits of people.

That group of painters, Ford Madox Brown, Millais and Rossetti did their work with great simplicity and truth.

As it happens, the Delaware Art Museum also houses the largest collection of Pre-Raphaelite art in the United States, so take a look after you wander through the Pyle show (not to mention the Pyle galleries) and note the many similarities.
Posted by Ian Schoenherr at 9:39 AM