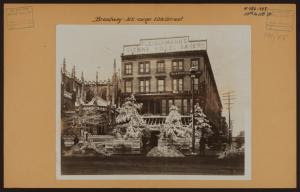 The address is (well, was) 788 Broadway at Tenth Street in New York City, right next to James Renwick’s Grace Church. Fleischmann’s Vienna Model Bakery was on the street level, and, as Pyle’s friend James Edward Kelly recalled: “The upper floors of the building were full of little artist studios, like tiny cocoons, in which young artists tried to work out their daydreams.”


I have looked all over New York and have seen all the studios that are to be seen and am sure that I have one of the nicest, pleasantest rooms in the city. It has a fine north light and two side lights looking out on Broadway. It is only two blocks above Scribners’ office and I can now go down to Harpers’ and return in half an hour, instead of its taking me a half day to complete the journey and its business as formerly. There is steam heat in the room and running water and altogether it is very satisfactory. The rent asked for it last year was thirty-five dollars a month. I have got it for twenty-three, and an allowance for fixing it up, calcimining the walls, etc.

Another friend, artist William Henry Shelton, remembered in his 1918 history of the Salmagundi Club (which met on Friday nights at Science Hall on Eighth Street, opposite the Mercantile Library, from February 1878 to October 1879):


Howard Pyle was one of the popular members of that period when a member’s popularity depended largely on the quality of his work. He was usually too busy to attend the meetings, but it was only a step from Eighth Street to the studio building adjoining Grace Church, and a committee of one was frequently appointed to bring him down. Sometimes he would be found writing, but more often with a sheet of Whatman’s paper on his easel moving backward and forward before a wet drawing by the light of a student-lamp, and not to be disturbed or enticed from his work by threat or persuasion.

(In his 1927 history of the club, Shelton presented this slightly variant picture: “There was a tarrying place at Science Hall in Eighth Street when it was usually my job to entice Howard Pyle to the meeting from his studio next to Grace Church. He would be found with a kerosene lamp on the floor, stretching a sheet of Whatman paper, or otherwise engaged, and not to be enticed.”)


He had come to New York from a provincial city two years before, with a great deal of talent and some excellent letters of introduction.

His talents found him plenty of work, his letters of introduction admitted him into pleasant homes, and his poverty spurred him on to those vehement efforts that were afterward crowned with so great a success.

Huntford used to breakfast and lunch at the old Budapest Bakery, where they had the best coffee and rolls in New York.

It’s a short leap from the Vienna Bakery to the “Budapest Bakery.” And another character in the story, Frederick Vollmer, an old German “Heraldic Designer,” was likely an amalgam of Joseph Vollmering (1810-1887), the German-born painter, and one “Rudolph B. Irontraut,” heraldic artist (also German-born, c.1822), who were both at 788 Broadway when the 1880 U.S. Census was taken, just over a year after Pyle had left.

The building, of course, is long gone, but Grace Church is still very much there. Some more details can be found here.
Posted by Ian Schoenherr at 12:57 PM

I remember reading the second account of Pyle stretching Whatman paper on the floor, and thinking, why is he stretching paper? To do a watercolor? Or is he painting on paper? Then the first version of the anecdote has me thinking "what kind of art is he making on wet whatman paper?" But I assume I'm reading the anecdote wrong somehow, or there's some technical procedure being referenced here that I don't know about.

I've read a bit in Pennell's book on Pen Drawing about whatman paper. And apparently it has quite a grain to it.

Early on, Pyle did a lot in gouache or black and white "wash" on paper (and he even mentions ordering a paper stretcher on November 24, 1876 - not long after moving to NY). Take look at this chapter - it covers a lot of ground and might be enlightening: