What Did Howard Pyle Die Of?

What did Howard Pyle die of? Most contemporary newspapers reported that it was “heart failure” or “heart disease”. The more common notion - via those closer to the Pyle family - is that it was “kidney trouble” or Bright’s Disease - and his known symptoms are consistent with that diagnosis.

And still another, also kidney-related cause of death can be found in the “Report of the Death of an American Citizen” sent by the American Consular Service at Florence, Italy, to the U.S. State Department. This document - signed, by the way, by Leo J. Keena (1878-1967), the American Consul, and an acquaintance of the Pyles - said it was “uric acid poisoning”. 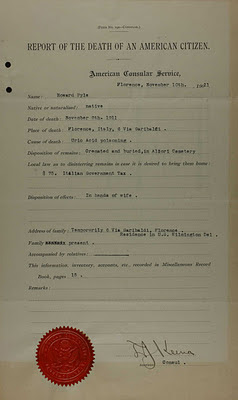 Coincidentally, Pyle’s brother Clifford died at 53 of “a kidney affliction” in 1910 and his brother Walter died at 59 of Bright’s Disease in 1919. So perhaps a genetic component was involved.
Posted by Ian Schoenherr at 7:28 AM

This is great material, Ian. May I copy it for our files?
Gail S.

I'll send you a better copy -