I plan to write more in depth about Howard Pyle's involvement with To Have and To Hold, the novel by Mary Johnston, but until then, take a look at this odd scrap of Pylean ephemera...

It's a promotional bookmark which Pyle executed in its entirety (and by that I mean he drew the picture and did the hand-lettering and the border). The portrait is in charcoal and it appears in the background of a 1902 photograph of Pyle taken by his student and sometime photographer, Arthur Ernst Becher (1877-1960). It was initially published in Art Interchange for January 1903. 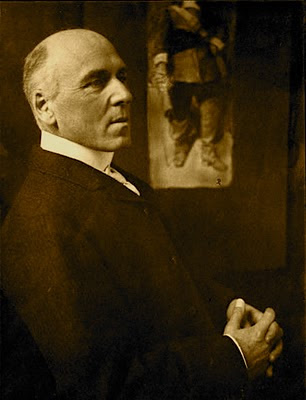 Becher, by the way, was a friend of Edward Steichen from their days in Milwaukee, and his photographs were shown in the first exhibition of the Photo-Secession (1902) and in Alfred Stieglitz's Camera-Work (October 1903).

And there's certainly something Steichenesque about this Pyle portrait - but perhaps I'm being superficial if it calls to mind Steichen's photo of Rodin: an artist in his studio (presumably) with an example of his work ethereally floating in the background - sort of like those "spirit" photos championed by Arthur Conan Doyle where an image of a dead loved one hovers around the portrait of a living person. Granted, this photograph of Pyle lacks the "mystery" and "atmosphere" of Steichen's Rodin, but still...
Posted by Ian Schoenherr at 9:45 AM