In his advanced Illustration Class at the Drexel Institute, Howard Pyle occasionally assigned seasonal topics to his pupils with the aim of submitting the best examples to art editors of leading periodicals. Pyle sometimes provided text to go along with or perhaps to inspire his students’ illustrations, and so we have his observations on “Decoration Day” (illustrated by Sophie B. Steel), a Halloween playlet called “The Priest and the Piper” (with a picture by Sarah S. Stilwell), and, apropos of today, “St. Valentine’s Day,” printed in Harper’s Weekly for February 19, 1898, and featuring a double-page spread by Anne Abercrombie Mhoon.

I need to dig up more on Miss Mhoon, who studied with Pyle for about five years and who Pyle must have considered one of his stronger pupils: in spring 1897 she and Bertha Corson Day spent two weeks working in his Wilmington studio; her work was shown in several exhibitions of the Pyle-directed School of Illustration; Pyle featured two of her pictures in his article, “A Small School of Art” (Harper’s Weekly, July 17, 1897); and in 1898 she was one of ten students awarded a scholarship to the first Summer School of Illustration at Chadd’s Ford. If what I’ve learned is accurate, Mhoon was born June 6, 1876, in Mississippi, and died January 2, 1962. She married Hugh McDowell Neely (1874-1925) in Philadelphia in 1906 and had at least one child, named Hugh (1907-1937). All three are buried in Elmwood Cemetery in Memphis, Tennessee. 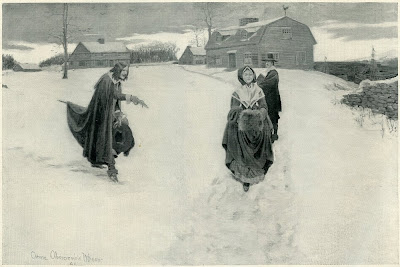 St. Valentine’s Day in the old times possessed a popular significance that we of these degenerate days of filigree paper and printed rhymes can hardly appreciate. Popular tradition had it that the birds mated upon the good bishop’s natal day, apropos of which Old Drayton, in Shakespeare’s time, writing a verse to his “Valentine,” begins his pastoral thus:

and so forth, to his mistress’s eyes, lips, and other charms.

Following these supposed habits of the feathered creatures, it became by-and-by a custom in the generation or so following for the men and women of that day to choose each his or her Valentine, to whom he or she was supposed to remain mated for the rest of the year. The gentleman generally entered into the compact with a poetic effusion and a gift, of more or less value, to the lady of his choice, and for the twelvemonth following he was supposed to devote himself exclusively to his chosen mate.

Usually the element of accident entered not a little into the choosing of the Valentine, for the first man and the first woman who met in the morning were supposed to remain Valentines and mated for the year to follow.

As witness to this, Gay, writing early in the eighteenth century, and beginning with the same theme that inspired Old Drayton -


“Last Valentine, the day when birds of kind
Their paramours, with mutual chirpings, find” -


“The first I spied - and the first swain we see
In spite of Fortune shall or true love be.”

Old Pepys in his immortal Diary - that great reservoir of dead and bygone gossip - gives us a number of glimpses into the Valentine’s day of his time.

Once, mounting to the Olympian altitude of the gossip of White Hall, he tells us, apropos of Miss Stuart (afterward Duchess of Richmond), that “The Duke of York being her Valentine, did give her a jewel of about £800; and my Lord Mandeville, her Valentine this year, a ring of about £300.” Descending thence to the platitudes of his own private affairs, the good gentleman tells us very soberly that “I am also this year my wife’s Valentine, and it will cost me £5”; and adds, naïvely, “but that I must have laid out if we had not been Valentines.”

In another entry in his Journal he tells us how his wife hid her eyes lest she should see the masons working about the house, and so should miss choosing her proper Valentine; and in another place he informs us that “My wife, hearing Mr. Moore’s voice in my dressing-chamber, got herself ready, and came down and challenged him for her Valentine.”

From all of which we of these days may catch a certain remote notion of the importance of St. Valentine’s day in those far-distant old times so long passed away and gone.


As illustrating the importance of this one-time notable feast-day, Miss Mhoon has given a pictured image of the transplantation of the custom of the time into Puritan New England of, say, the year 1655.

We know what strong testimony the Puritans bore against the puddings and the “meat pies” (probably the mince pie of our day), and all the jocularities of the old Christmas season, and we also know that they made a point of studiously ignoring the anniversary of the King’s birthday. It is altogether likely they would look with even less favor upon the suggestive levities of Valentine’s day.

The somewhat seedy Cavalier, who is doubtless offering the Puritan maiden an effusion in these, in which dove is made to rhyme with love, and eyes with skies, and dart with heart, has perhaps been spending the whole long winter in the dull, cold little settlement for the sake of escaping, let us say, from the pressure of his debts at home. One can imagine how greatly a man of his parts must have wasted in such surroundings as the picture indicates. As for the Puritan maiden, either her heart inclines more kindly toward the young Presbyterian minister who, clad in black, and with a voluminous theological volume under his arm, regards the pleasantries of the stranger with such manifest mislikings - either this, or else she has been so well brought up that even a cavalier in a red cloak and with high London manners cannot melt her reserve. Who shall say? The ways of women are passing strange!

I confess to a sympathy for the poor Cavalier fellow, and wish that a good tight ship may be landing with sassafras-wood at some near-by port, and that he may thence get a safe passage back to England again, and into more congenial surroundings.
Posted by Ian Schoenherr at 7:04 PM

I'm astounded to hear that Pyle had so many top-notch female students. It's a wonderful thing but I wish we heard more from them after they left school. (And I thought the Main Line was difficult for women in the 1980's... :-) ) Thanks for the great blog about an amazing illustrator.