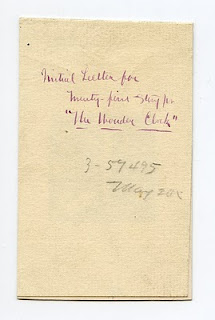 I don't necessarily want to see Howard Pyle's original illustrations in pristine condition, since the annotations that often appear on them can help shed light on his process. Above is an initial letter "T" for "How the Princess's Pride Was Broken," the twenty-first story (of 24) in his book The Wonder Clock (Harper and Brothers, 1888). He drew it with India ink on a 2.75 x 4.5" piece of Bristol board, glued on a little protective flap (made from a scrap of writing paper, watermarked "[crown] Royal Irish Linen / Marcus Ward / & Co") so it wouldn't get scuffed or too grubby, then labeled both flap and art with purple ink. A staffer in the Harper Art Department probably penciled in "1 1/4 in wide" (the size of the reproduction) and "3-59495 / May 20" (possibly an inventory number and the processing date).

Pyle delivered this "T" along with several other letters on May 16, 1887, and as he delivered the previous batch on May 10, he must have drawn this one between those two dates. So far, this is the only initial letter from the book that I've been able to inspect up close, but I gather he prepared all of them in more or less the same way.
Posted by Ian Schoenherr at 10:57 AM