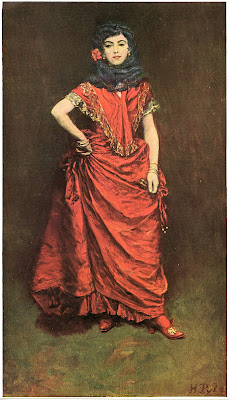 In 1925, Estelle Taylor, Hollywood actress and wife of world heavyweight champion boxer Jack Dempsey, reminisced in a syndicated interview about growing up in Wilmington. Here (from The Delmarva Star, February 7, 1926) she tells of what happened after she dropped out of high school:


Shortly afterwards I met Howard Pyle, the noted Wilmington artist and illustrator, and he asked me to pose for him.

After much urging Grandmother [Ida Barrett] agreed that I might pose for Mr. Pyle. For, as she said: “He’s such a fine man, the association may be very pleasant for you, and besides, (and with her it was a very important ‘besides’) the experience may get those stage ideas out of your head.”

But as to that last, it worked just oppositely.

I’ll never forget the day I walked into Mr. Pyle’s studio. The first thing I saw was a picture of a pirate sitting in the sand, with a bandanna about his head - his brow wrinkled in thought.

As I studied the picture which, I think, is one of Mr. Pyle’s most famous works, I fell to wondering what was in the pirate’s mind. I wondered if his future was troubling him as much as mine was beginning to trouble me. For I found myself consumed with restless ambition. And I immediately began to figure how, by posing for Mr. Pyle, and possibly other Wilmington painters, (for there were three separate colonies of artists there) I could earn enough money to start on the stage.

While those thoughts were going through my head Mr. Pyle came into the room. Although, on our first meeting, he had struck me as large, he now seemed taller and bigger - and much more formidable. I felt somewhat awed by him. And I began to fear that my posing days might be limited to just that one, for I was not at all sure that Mr. Pyle would like me as a model.

But I had all my fears for nothing. He was kindness itself and I never saw anyone more patient or more considerate, only sometimes he’d forget how long he had been working and would keep me in one position until I felt I’d drop from fatigue. That, however, I knew, was the result of his concentration on his painting. For, when he realized how tired I must be, he’d say: “Oh, I’m so sorry, child, you must be worn out. Now take a nice long rest.”

All the time he painted he whistled, no tune in particular, as I noticed over and over again, but a sort of medley - and he always seemed happy and contented with life. My experience as a model for him was extremely happy.

Ida Estelle Taylor was born May 20, 1894, in Wilmington. Some biographies erroneously say she was born “Estelle Boylan” and was of “working-class Irish” stock, but she appears on the 1900 Census, aged six, the daughter of Harvey (or Henry) D. Taylor, a building and loan agent, living on a respectable stretch of Washington Street (just a few blocks north of Pyle’s home from 1881 to 1893). While she may have been of Irish descent, her parents and four grandparents were born in Delaware, Pennsylvania, and Maryland. Estelle’s mother married Harry Boylan c.1913 - hence the Boylan confusion - but by then Estelle was married to Kenneth Peacock. She later moved to New York City and Hollywood and married Jack Dempsey in 1925.

Estelle vaguely says she dropped out in the “second grade” of high school. Gertrude Brincklé said Estelle posed for the title character of the story “Lola” for the January 1909 Harper's Monthly Magazine, which would have made her only 14 - a little young, but not out of the question. And Pyle was indeed at work on “Marooned” in 1908: he showed it in progress to his students Gayle Hoskins and Ethel Pennewill Brown on February 6 of that year.

Brincklé also recalled that Estelle first modeled for Clifford Ashley, who recommended her to Pyle, and that she went by trolley to the Taylor house to “hire” Estelle and escort her back to 1305 Franklin Street. Although Estelle does not mention Ashley in her interview, she does remember posing for Harvey Dunn, Leslie Thrasher, E. Roscoe Shrader, Stanley Arthurs, Charles MacLellan, W. H. D. Koerner, and Douglas Duer - all Pyle disciples. And she notes, “Altogether I worked for Wilmington artists for approximately two years.”
Posted by Ian Schoenherr at 8:36 AM