“The best engraver in the world is Mr. French” 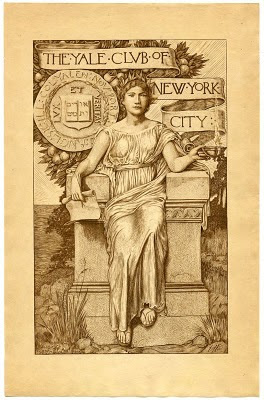 “I have long admired your very admirable work, and have lost no opportunity of speaking of it to my friends, I am glad that my small efforts in that direction have brought about such results as the Bibliophile bookmark [sic], and the book-plate of the Yale Club.”

So said Howard Pyle in a letter to Edwin Davis French, written on December 11, 1905. Pyle had just completed a bookplate design for Edith Kermit Roosevelt - Teddy’s wife - and was hoping to get French to engrave it. He had said in a letter to her, “I think the best engraver in the world is Mr French. If he cuts this for you you will have a treasure that will always be a joy to you, for his work is as good as it is possible to be.” French, however, was unavailable for a few months, so Pyle got Sidney L. Smith to do the work instead.

I confess I don’t know what Pyle meant by “the Bibliophile bookmark.” Pyle’s drawings and paintings for the Bibliophile Society were photo-engraved, or etched by W. H. W. Bicknell. French did, however, engrave Pyle’s second bookplate for The Players Club in 1894. 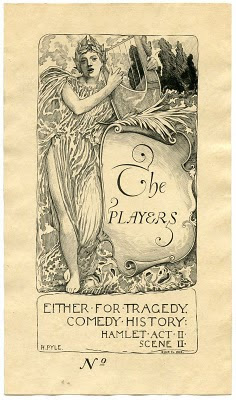 
I think this is Pyle’s least successful bookplate design. I blame him for an awkward conception more than French for faulty engraving, although French seems to have blamed himself for its defects. It was, I understand, only his second such commission and Pyle’s “exquisitely delicate wash-drawing” - as French called it - “at the time seemed to me (and indeed I fear it proved to be) quite too formidable an undertaking for a plate-engraver of my limited experience.”

Perhaps the original art will turn up one of these days and we’ll be able to judge for ourselves.
Posted by Ian Schoenherr at 9:03 PM

Edwin Davis French is indeed an excellent engraver, but the title of the best engraver in the world must surely go to British micro-artist Graham Short. I bought a piece of Mr Short's work in February 2011. It is the best art investment I have ever made. This artist engraves along the sharp edges of razor blades and all of his work cannot be seen by the naked eye, only through the most powerful microscopes. Graham Short's work is collected by the world's most serious art investors, and quite right too. Michelle Stacey, Manchester, England