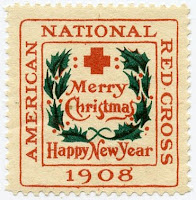 Did you know that Howard Pyle - at the request of his friend and fellow Wilmingtonian, Emily Perkins Bissell - designed the first nationally distributed Christmas seal? (The first seal, of 1907, was designed by Miss Bissell herself and was more of a Delaware-centric affair.) The Report of the Seventh International Tuberculosis Conference, Philadelphia, 24th-26th of September 1908 (Berlin-Charlottenburg, Internationale Vereinigung gegen die Tuberkulose, 1909) stated:


The Christmas Stamp in red and green, which this year has been kindly designed by the artist, Mr. Howard Pyle, will be sold for the benefit of the Red Cross anti-tuberculosis work. The little stamps do not carry mail, but with the good wishes that they bear to the friend on whose letter or gift you may place them, they will carry also some of the Christmas cheer to many sorrying homes, where the terrible scourge of tuberculosis now holds its sway.

These so-called “bullets in the fight against tuberculosis” cost a penny a piece and by mid-November 1908, seven million copies of Pyle’s stamp had already been ordered.

For some more historical background, take a look at this from Harper’s Weekly for December 5, 1908:

The Christmas stamp which the American Red Cross is selling this year as part of its active campaign against tuberculosis, was invented in Denmark, where, in 1904, the Danish government issued a similar stamp with the King's head and the word “yule” on it, not good for postage, but to stick on Christmas letters, postal cards, and packages.

The Danish stamp was issued to raise funds to build a tuberculosis hospital for children. Jacob Riis wrote a piece about it [see The Outlook for July 6, 1907] and tried to get a similar stamp issued by our government. That proved impracticable, but last year the Delaware Red Cross issued a Christmas stamp and sold about 400,000 of them. That considerable success led the National Red Cross to make a wholesale experiment this year. Howard Pyle designed a stamp, and it is to see how many can be sold between Thanksgiving and New-year's. The purpose is as much to advertise the work against consumption, and educate and interest the public in it, as to raise funds. The stamps will be supplied to buyers and sellers from the Red Cross headquarters in each State, but the distribution will be well attended to, and the Christmas stamp is likely to be a very conspicuous feature of the coming holidays.

Posted by Ian Schoenherr at 8:11 PM