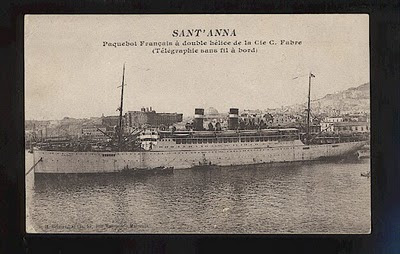 The Sant’ Anna in Naples

In the rain and before dawn on December 7, 1910, the Sant’ Anna, carrying Howard Pyle, his family, and his secretary, Gertrude Brincklé, landed at Naples, Italy.

Pyle had already been unwell for several days and considered staying over in the port city, but, according to Miss Brincklé, he woke that morning “with light of determination in his eye” and decided to continue on to Florence as planned.

Fortunately, they met a Wilmington acquaintance, a Mr. Gawthrop, whose friend, Mr. Montefredini, helped get them through customs and onto a northbound train. After dark that same day, they arrived in Rome. But Pyle was unable to travel any further, so they found rooms at the Grand Continental Hotel, just opposite the Stazione di Termini.
Posted by Ian Schoenherr at 5:10 PM