“It was great to see him painting” 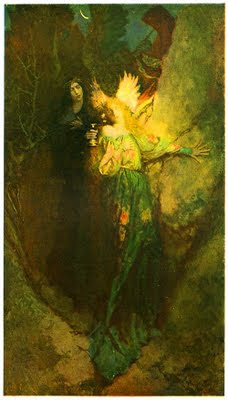 
Mr Pyle likes very much to have us watch him work and the other day we went up to his house & watched him work on a picture (one of four) for the Xmas Century. It was great and seeing him produce such a thing was a treat & helped to strengthen my confidence in him. He is undoubtedly the greatest in his line and oh such a fine man.

So wrote Allen Tupper True - then a probationary student of Howard Pyle at Chadd’s Ford* - to his mother back home in Colorado on July 11, 1902. He was referring to Pyle’s illustrations for “The Travels of the Soul” which came out in The Century Magazine for December 1902. But which one did True see? Well, on November 24, 1902, he wrote his father and said:


How do you like his work in this (Xmas) Century? It was great to see him painting on that third one ‘The Valley of the Shadow of Shadows’ [sic]...

And where was Pyle “painting on that third one”? At what was then known as Lafayette Hall, the house where Pyle stayed when teaching at “The Ford” from 1898 to 1903 - just across the road from the studios at Turner’s Mill. Here’s what the place looks like these days: 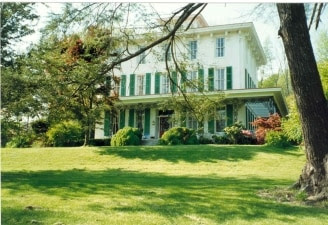 This photo, by the way, comes from some kind of real estate listing that states: “The Brandywine School of Art was birthed in this home and the property was immortalized by Andrew Weyth in his painting ‘Painters Folly’". Surely they mean Andrew Wythe! Just kidding. Seriously, though, I don’t know where to begin....

* Although it’s now commonly or even officially called “Chadds Ford” - sans apostrophe - Pyle always referred to the village as “Chadd’s Ford”, so I’ve been following his precedent for the sake of consistency.
Posted by Ian Schoenherr at 8:30 AM

That is interesting... I wonder if the young Mr. True had his facts straight. Didn't Pyle say at some point, after some of his students pestered him to see him work, that "while you could see me paint, you could not see me think." Meaning, therefore that Pyle did not really believe having them watch him work was all that instructive as to what was really going on.

Or did Pyle enjoy acting in front of an audience... a byproduct of a theatrical mother, perhaps?

Or was it simply a method of insuring his own authority as a teacher and thus promoting confidence and attentiveness in his students? (Thereby reducing the amount of time wasted in explanation and verbal defense.)

It was indeed only a little over a month into True’s time with Pyle, so he may very well have overstated things.

But I also think that things were different at Chadd’s Ford - more informal and intimate - and so Pyle was apt to work “in public” as it were. And he probably knew he was setting a good example, work-ethic-wise, etc.

Also, in describing his teaching methods early in 1895, Pyle said, “My lectures...are more in the nature of a running commentary upon actual work which I do before the class. In the execution of this work I explain point by point the reasons why I do certain things, not, however, from the technical standpoint.” And a visitor to Drexel in 1898 said that Pyle “took us right up to his class and went right on teaching - painted himself from the model and class watched him - talked all most all the time, and it was awfully nice!”

So it seems that drawing or painting in the presence of his students was simply part of his teaching process. Theatrical, yes, but mostly educational.

(Pyle was an actor, too, in his younger days, but that's another story!)

I had no idea that Pyle's composition/aesthetics lectures were a "running commentary upon actual work" he was doing... that is absolutely fascinating to me. (Talk about practical application!) I have assumed all along that Pyle spent these lectures discussing "imaginative projection", aesthetics and storytelling which he may have illustrated with a slide show of completed works of other artists and diagrams of compositional principles. (Epistemology laughs at me once again.)

I assume no record of his compositional lectures of this type exist. (Didn't NC say that it was one of these composition lectures that was "the most illuminating one I've ever heard.")

Forgot to mention my feelings about the Travels of the Soul series... so wondrous... yet the most opaque to me as to what he was thinking. My assumption is that they are allegories about Pyle's understanding of Swedenborgianism.

The “actual work” he did “before the class” was probably? possibly? more prevalent in his earlier (i.e. Drexel) years of teaching. I’m really not sure how long he kept that aspect of it up. Then again, as late as 1910 he would, if need be, draw in front of the assembled group in order to illustrate a point. (And I think I should post more about THAT. I was planning to, anyway.)

Generally, though, his “Composition Lectures” - apart from the philosophizing about art and life and more spiritual things - very much - and perhaps mostly - involved him reacting to his students’ works.

And in 1905 and 1906, at least, when he addressed large audiences, he would react to projected slides of other artists’ works (I posted an article about this kind of scenario in early January). Before then his “big” talks may not have been illustrated at all - but they dealt more with “The Present Aspect of American Art” and “The Art of the Age” - and not about how good pictures are made or how they could be improved.

This is a big topic, but I’ll stop here!