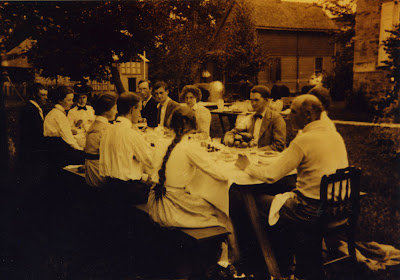 Howard Pyle’s taste in food has always fascinated me, and a dozen years ago I was asked to provide some information on exactly that topic for a book. Rather than draw up a simple list of his favorite dishes, I wrote a brief essay, and the compiler later asked if I’d consent to it being quoted in full. I said “Absolutely!” and by-and-by the book was published as The Artist's Palate.

It was a handsome thing, full of interesting anecdotes, illustrations, recipes, and even a foreword by Mario Batali. But I was chagrined to see that - unbeknownst to me - an editor or proofreader had made several “corrections” to my text:
Luckily, though, they had also “corrected” my surname by leaving off the terminal “r” which lessened my embarrassment somewhat. I guess. So, for the record, here’s what I originally sent:


When Howard Pyle landed his first important commission, he rewarded himself by immediately taking a friend to Delmonico’s where they “had a lunch of all the delicacies in season and out of season.” Thereafter, as his success and circle of famous friends grew, dinners at Delmonico’s and other such eateries were regular events in Pyle’s life. He was invited to a number of lunches and dinners at the White House and attended banquets honoring the likes of Mark Twain and other luminaries. The menus at these grand feasts were nearly as remarkable as the guest-lists. Pyle’s taste for fine food had its limits, however: when served truffles in Italy he said, “They taste like sewer-gas smells.”

By and large, the food Pyle is known to have enjoyed is of the comfort variety: ice cream, roasted chestnuts, popcorn, cake, pretzels, lager beer, dried fruit, chocolates, apple cider, ginger ale, waffles, turkey, and pie. He once offered to send some terrapin to a sick friend, saying “’tis good invalid food.”

While teaching at Drexel Institute in Philadelphia, Pyle occasionally invited some of his students to lunch. He liked to expose them to new dishes, but he also knew the power of food as an inducement to work or as a reward for work well done. Once, at the Hotel Bartram, he said to the waiter, “I want to introduce these boys and girls to the famous Philadelphia pepper pot. Bring them a large dish and a large quantity of this famous Philadelphia pepper pot for I want them to know it and because I expect a great deal of work from them this afternoon.” On hot days, Pyle’s penchant for lemonade spurred him to lead his summer school students on long bicycle trips from Chadd’s Ford to the one restaurant in Wilmington that made it especially with Apollinaris water.

Pyle peppered his pictures and prose with scenes of eating and drinking. The Merry Adventures of Robin Hood in particular is full of jolly feasts. The activities of Robin and his men whet their appetites, and they satisfy themselves by “roasting juicy steaks of venison, pheasants, capons, and fresh fish from the river,” by devouring great pasties “compounded of juicy meats of divers kinds made savory with onions, both meat and onions being mingled with a good rich gravy,” and by washing it all down with pots of “humming ale” or a “goat-skin full of stout March beer.” In one memorable passage, Robin fantasizes about his ideal meal: “Firstly, I would have a sweet brown pie of tender larks; mark ye, not dry cooked, but with a good sop of gravy to moisten it withal. Next, I would have a pretty pullet, fairly boiled, with tender pigeons’ eggs, cunningly sliced, garnishing the platter around. With these I would have a long, slim loaf of wheaten bread that hath been baked upon the hearth; it should be warm from the fire, with glossy brown crust, the color of the hair of mine own maid, Marian, and this same crust should be as crisp and brittle as the thin white ice that lies across the furrows in the early winter’s morning. These will do for the more solid things; but with these I must have three pottles, fat and round, one full of Malmsey, one of Canary, and one brimming full of mine own dear lusty sack.”

* The above photograph was probably taken by Frank Schoonover, since it otherwise shows all of the 1899 Summer School students. Maybe that’s his cap on the bench, marking his seat. Howard Pyle, is at the head of the table in the foreground. At the opposite end is his secretary, Anna W. Hoopes (at least it looks more like her than his wife, Anne). On Pyle’s left (from left to right) are Robert L. Mason, Annie L. Hailey (or Haley, a Drexel student who served as a model), Anna Whelan Betts, Emlen McConnell, and Sarah S. Stilwell (with the long braid). On Pyle’s right (from left to right) are: Philip L. Hoyt, Stanley M. Arthurs, Ellen Bernard Thompson, Clyde O. DeLand, and Bertha Corson Day (obscured by Pyle, but her hairstyle is distinctive).

NOTE of August 20, 2014: I’ve since discovered that the photo was taken not at Chadds Ford as had been noted previously, but at Valley Forge, Pennsylvania, on August 20, 1899.

Posted by Ian Schoenherr at 4:03 PM