Howard Pyle was not above reworking a picture after publication. “The Burial of Braddock” is one example: after it appeared in Harper’s Monthly - and after Paul Leicester Ford pointed out an error in it - Pyle turned a fancy, but historically innaccurate coffin into a crude box made of scrap wood. He did this right before shipping it to its new home at the Boston Public Library where it would, in his words, “go upon record.”

Another post-publication change can be seen in his 1889 work, "My hatred of him seemed suddenly to have taken to itself wings," for Harold Frederic’s novel In the Valley. Here’s how it looked in Scribner's Magazine for July 1890, engraved by Henry W. Peckwell: Now compare it to the halftone plate that was used in the book edition of the novel. (Granted, this is really just to show how the original picture differs from engraver Peckwell’s interpretation.) 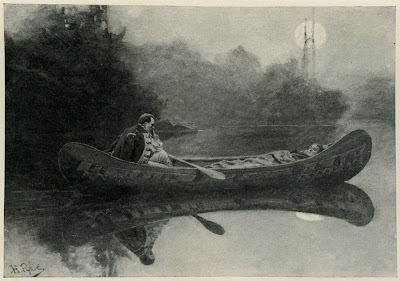 Fast-forward to 1892: Frank Nelson Doubleday - then a rising star at Charles Scribner’s Sons, but who hadn’t yet struck out on his own - was collecting material for a high-end, oversized “book” in portfolio form called American Illustrators. In early April, Doubleday wrote to Pyle about the project and asked him to choose one of his illustrations to be featured among the 15 finely-printed plates. Without hesitation, Pyle picked "My hatred of him seemed suddenly to have taken to itself wings" since it was “perhaps, my best work for Scribners in black and white.” Doubleday then tracked the original to Germany (I’m not sure why it was there) and had it shipped to Pyle.

But on July 16, 1892, just after receiving the picture, Pyle asked Doubleday, “if you would be willing for me to alter the drawing a little. I find, looking at it with new eyes, that the canoe is somewhat out of proportion and just a little out of drawing and I should like to make it as perfect as possible.” Doubleday acquiesced and Pyle had at it. The result can be seen here, in the photogravure plate as published in American Illustrators that October: 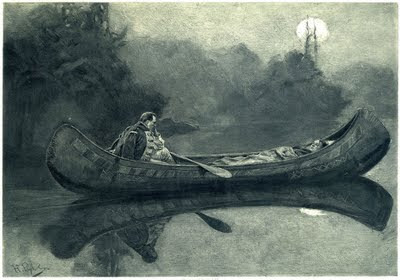 Not only did Pyle reconstruct the ends of the canoe, he fiddled with the tall trees in front of the moon, softened the waterline, and toned down the reflections in the water. All of it to good, almost Dewing-esque effect. The title, too, was changed to the much less wordy “The Wounded Enemy.”

I don’t know if the original painting ever made its way back to Germany, but Scribner’s loaned it to the Trans-Mississippi and International Exhibition in Omaha, Nebraska in 1898, and in May 1913 they sold it for $150 (double, incidentally, what they had paid Pyle for it 24 or 25 years earlier) to collector William Bradhurst Osgood Field (1870-1949), and now it belongs to the Norman Rockwell Museum in Stockbridge, Massachusetts. And exactly two years ago today, Joyce K. Schiller’s short essay on the picture was posted here.
Posted by Ian Schoenherr at 1:24 PM

I think it is pretty clear that the magazine engraver did not give an accurate sense of the original picture. In the areas that do not change between the original and the painted revision, the second engraving is plainly closer to the last one.

It is very interesting to see how much Pyle learned between 1889 and 1892. From this example, it seems to me that in 1889 he's still concerned with questions of drawing and painting and how to create a believable scene. By 1892 his thoughts are much more compositionally directed and his questions of drawing and painting are answered by larger concerns than mimesis. The 1892 version has a power and clarity that the original did not.

I'm currently reading through Andrew Loomis' Creative Illustration. In it, there's an alleged excerpt from Howard Pyle in which he states:

I think the final reworkings of the canoe's bow and stern may hint that the first iteration was focused on the vessel's texture while the second and third place a greater emphasis on its form, hence the adjustments in perspective. Perhaps since this is a monochromatic piece, he decided to orient the lighting more towards the quote's 2nd principle than the 1st.

Thanks for posting this! It's still helpful 8 years later. There are no visuals to accompany the excerpt in Loomis' book. This really provides tons of insight into the concept.