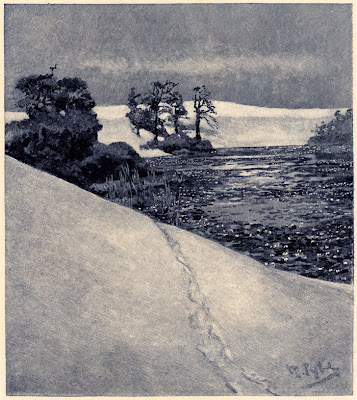 Howard Pyle isn’t known for his landscapes, but he did quite a few over the years, mostly to illustrate his own travel articles. Shown here is a strong, simple example from “Among the Sand Hills” in Harper’s New Monthly Magazine for September 1892. The engraving is unsigned, but is the work of either E. H. Del’Orme or Felix Levin - and in this case it’s a little hard to see where the engraver ends and Pyle begins.

Pyle painted “The Lily Lake” in 1891, while summering in Rehoboth, Delaware. The original is lost, but, judging from two of the four known originals from this article (and Pyle’s hints in his letters), it’s full color oil on canvas and perhaps 24 to 36 inches high; much larger than most of his non-pen-and-ink work of that time, which tended to be smallish black and whites on board.

Whether Pyle painted it - or at least started it - en plein air is in question. Although he set up a portable easel and umbrella now and then (there’s even a self-portrait of him doing just that), he knew the limitations of painting outdoors: after one attempt he wrote, “The glare of the light outside is so great that it is impossible to tell exactly what you are doing.... I had my work all everyhow, and it looked like chalk when I got it into the subdued light of the studio.” There’s also a chance that he worked from photographs. But he did consider it to be “as faithful a transcript as I could make of nature.”

The location - in the dunes, pines, and ponds around Cape Henlopen - was only a hike or wagon ride away from his house on the beach. Here’s how Pyle - that “mystic naturalist” or “naturalist mystic” - described the scene:


Back of the Capes lie not only the strange white lifeless hills and valleys, and the dark skirt of pine woods with its circling shadows, hot and dry and still, but dense jungles and tangled wildernesses; and hidden gloomy swamps of stagnant water inhabited by strange wild creatures; and here and there lonely little lakes of fresh water, blooming, in the midst of all the grotesque dark surroundings, with fields of white lilies.

There is one such little lake that lies in the very clutch of the fatal sand - a round bowl of warm crystal, a perfect garden of lilies that fairly burdens the hot air with the fragrance of its sweetness. There is a bushy dingle here and a leafy tangle there, where birds nestle and sing. Tall slender bulrushes and cat-tails flick and flirt in the light wind at the edge of each little bank. A rank wet woodland leans over the water at one side, and all is cool and fresh and pleasant.

But around it circle the hot livid arms. As the sand creeps forward inch by inch, those arms close slowly but surely, strangling the lake, smothering out the teeming water life, burying the lilies, drinking up the clear warm water.

The little lake is certainly doomed by a visible and inexorable fate. But meantime it smiles in the warm sunlight; it holds an image of heaven in its bosom (and an image of death as well); its lilies bloom, the birds sing on its banks, its life teems, and its waters refresh all things near. The simile fixed in sand and water seems very pat and apt. Who is there cannot read it?

But all similes have an obverse and a reverse. To this there is a reverse also.

On the smooth face of the sand, all round the margins of the lake, are everywhere strange tracks and marks and foot-prints left by a grotesque and ugly life that has passed over it. Everywhere, crossing and recrossing in a net-work of sinuous lines, are paths where serpents and vipers, great and small, have come and gone. Everywhere dotting the sand are awkward squab footprints of frogs and toads, marks scraped by the bellies of lizards, rough misshapen tracks of mud-terrapins. Everywhere blended and commingled with these marks of reptile life are stamped the pigeon-toed footprints some big and clumsy, some little and sharp - left by awkward water-birds of all sorts and kinds that prey upon that other misshapen reptile life. For here and there a ragged scuffling mark upon the sand shows where some grotesque tragedy has happened. Perhaps all the squalor of that reptile life is even now wriggling under the smooth surface of the lake that shows upon its face only white stars of water-lilies and a mimic image of heaven.

Posted by Ian Schoenherr at 9:11 AM