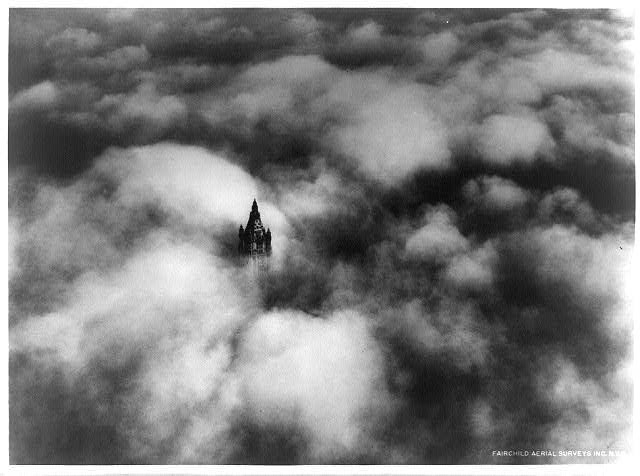 Ever since he finished “The Landing of Carteret” for Cass Gilbert’s Essex County Court House, Howard Pyle hoped to get another mural commission for one of the architect’s buildings. It never happened. Despite their personal friendship - and the strings Gilbert pulled - their professional connection effectively ended when the painting went up in Newark in March 1907.

While idling in Italy some four years later, Pyle sent Gilbert the occasional, gloomy missive about his health and his prospects as a muralist. “If only some one of the libraries which you are building wanted decoration, I really think I could now make something of some account in the world,” he wrote on April 4, 1911. “But I have not yet been asked to do anything.”

Gilbert had bigger - or taller - fish to fry. “For the last year my time has been very much taken up by the skyscraper problem,” he wrote to Pyle on August 29, 1911. The skyscraper in question was the Woolworth Building, which, at that point, had “not yet risen above the sidewalk level.” The contractors, however, promised to have 55 stories up by January 1, 1912...


It will be a miracle if they do. The whole thing has been handled in such a way that we have been in a perpetual series of rushes for over a year and not until we had nearly completed three different sets of designs, each larger and higher than the one before it, did we finally get really under way and then in not less than ninety days we had to make the plans of a structure which will be, for the time at least, as advertised, the highest in the world. It is too bad I could not have had all the time that was spent on preliminary work to develop the final design and make the best of it, however, we have got a fine plan and I think a very interesting exterior. I do not like to put down in writing what I think about doing work so rapidly, for not only antiquity but posterity would stand aghast at the extraordinary proposition.

Unluckily for Gilbert, his words live on in his own copy of his letter to Pyle, now at the New-York Historical Society.

Luckily, though, the building lives on, too.