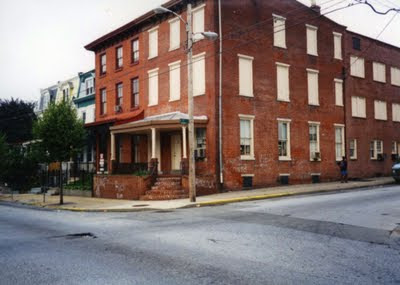 I was going through some old files and came across this photo. It was taken by Paul Preston Davis one day in July 1994 when we were tracking down Pyle’s different residences in and around Wilmington, Delaware. Many - most - were gone, pulled down years earlier, but a couple still stood.

The poor old building shown here might be one of the survivors. That is, if it was erected more than 140 years ago: it looks it, to me, despite the more recent portico and newer structure added to the back. It may also have been a one-family dwelling divided into two, at some point. It sits (provided it hasn’t since been destroyed) on the southwest corner of Seventh and West Streets in Wilmington.

The Pyle family moved to this location from their second house in the country, called “Evergreen” or “Evergreens” on the Philadelphia Pike, in the late 1860s. Actually, the exact year may have been 1869, if we can trust Howard Pyle’s statement, “Nearly all of my life up to sixteen years was spent in the country.”

The Pyles’ time here corresponded with the three years that Howard spent studying art under F. A. Van der Wielen in Philadelphia. They may even have chosen to return to Wilmington proper to make Howard’s commute easier - unless, of course, he lived in Philadelphia when classes were in session, since he also said:


At the age of 16 I left home to be a student at a private art school in Philadelphia. The school was kept by a man who won a gold medal at Antwerp, the center, perhaps, of the most technical art in Europe. I remained three years in Philadelphia... [emphasis mine]

But young Howard would still have spent long periods at his parents’ place. In fact, we know for sure that he was there on July 11, 1870, when the Ninth U.S. Federal Census was taken. On that day, the household included the immediate Pyle family (William, Margaret, Howard, Clifford, Walter, and Katharine) plus some others:
And it was probably here that the 18-year-old Howard drew the masthead for Every Evening, which first appeared in print on September 4, 1871.

In 1872, however, the family packed up and relocated yet again, to yet another house on Market Street - their third of four - and the sixth home Howard Pyle lived in before the age of 20.
Posted by Ian Schoenherr at 11:00 AM