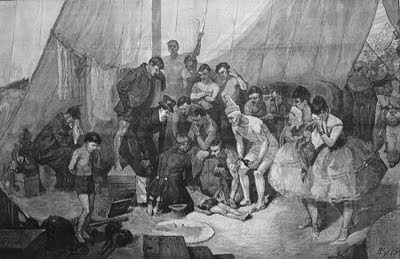 “An Interrupted Performance” by Howard Pyle (1878), engraved by Frederick Juengling (1880)

Most of Howard Pyle’s works appeared in print just months or even weeks after he finished them. But a fable he wrote in 1876 only showed up in St. Nicholas in 1885. And his 1880 article called “A Peculiar People” was kept on the shelf almost nine years before Harper’s Monthly published it.

“An Interrupted Performance” didn’t have quite that long to wait, but there’s an interesting explanation for the lag.

Pyle painted it in 1878 and showed it at an Art Students’ League exhibition in early November. The New York Herald for November 6, 1878, said: “The north wall was hung with sketch class drawings...and other black and white work. Among this we note...an excellent Howard Pyle ‘An Accident in the Circus.’”

The original was likely in gouache, but it hasn’t surfaced yet - unless it was burned or pulped, an unfortunate fate of many “leftover” works in Harper’s art department. So, for now, we only get to see Frederick Juengling’s 19.4 x 12.7" wood-engraving of it from Harper’s Weekly of July 31, 1880. It was accompanied by a lengthy editorial on the hazards connected with circuses:

There is something terribly incongruous about an accident in the “ring.” The scene is one of amusement and festivity, and when a disaster occurs, the spectators are struck with a horror and bewilderment far greater than would be caused by a parallel event in the ordinary ways of life. Especially is the multitude stirred when the victim is a child, like the poor little acrobat in Mr. Pyle's admirable engraving on our double page. It seems then nothing less than shocking cruelty to train children for these exercises, and to force them to endanger life and limb for the entertainment of a curious and indifferent crowd. There are certain feats invented by overzealous managers that should be put a stop to, by law if necessary; but so much of it is only an attractive display of legitimately developed human strength and able horsemanship that we should hate to do without it.... [and so on...]

But why the two-year delay from finish to print? The Chicago Daily Inter Ocean of May 11, 1890, had this to say:


Charles M. Kurtz tells an interesting little incident about Howard Pyle in the New York Star: “Pyle is a tall, robust, solid-looking man, without any of that traditional expression which is supposed to belong to the conventional literary or artistic character. Pyle is a nephew, by the way, of the late Bayard Taylor [sic]. I never see him that I am not reminded of an incident of a dozen or, perhaps, fifteen years ago. Pyle then had a studio away up in Broadway near Thirty-second street, and was intent upon following a purely artistic career. He attended the Art Students’ League, and drew from models in his studio. One time he wrote a pathetic little story, entitled, if I remember rightly, “Death in the Circus,” and illustrated it by a large drawing in black and white. He hoped to sell the story and the drawing to one of the magazines, and sent it all around, with the usual result that follows when a writer is unknown. The day it came back from one of the publishers he said: “Never mind; I’ll lay it aside, and after awhile, when these people know me, I’ll sell it for a good deal more than I could get for it today.” Three or four years afterward I picked up a copy of Harper’s Weekly, and here was Pyle’s story and a full-page reproduction of his drawing. Both were exactly the same as when I had seen them originally. There is a lesson in this for a good many young literary and artistic aspirants.

Kurtz’s yarn is intriguing, but he may have been mistaken about the “pathetic little story.” Although Pyle supplied some of his own explanatory texts for his Harper’s Weekly pictures, the editorial on “The Circus” doesn’t sound like Pyle - and, besides, it’s not a story at all. He probably assumed that his picture could - and should - stand on its own.

The New York Times, however, couldn’t help itself and provided something of a story (or at least something pathetic) when it praised the handiwork of both Pyle and Juengling on November 7, 1880:


There is another picture of Mr. Howard Pyle, engraved by Juengling, fully worthy of extended comment. It is called “An Interrupted Performance.” Only some poor little devil of an acrobat who did not do his trick, and smashed his ribs, or broke his spine. The two ballerinas, with extended skirts and flesh tights, approach the fallen lad. Sleery, the clown, holds a bottle, and he and a group of circus people surround the fallen boy. There is the ring master, keeping out the crowd, assuring them “that it is of no consequence,” but back in the canvas, you see the mother of the lad, in tears, while along side of her is the monkey. You need not look for the daintiness of touch here, or copper-plate platitudes. Engraver has followed the sentiment of the artist, and worked with all his heart and soul to follow the touch, the method of the pencil and brush. “Poor Billy, a promising kid, was a-going to be a sawdust star some of these fine days, and there he lies limp and dying,” everybody in the pictures says that, and even the horse that looks on seems to know all about it. An artist bred to his calling could understand the ability shown in the special work of this print, and the street-corner arab would find out the sentiment in it.

(Amusing to note: in reporting on “The Ruin Wrought by the Recent Storm at Manhattan Beach,” the Detroit Free Press of December 31, 1880, “borrowed” the Harper’s Weekly lead: “There is something terribly incongruous about an accident on Christmas Day. The occasion is one of amusement and festivity and when a disaster occurs...”)
Posted by Ian Schoenherr at 9:12 AM