“Delaware, the land of peaches!” 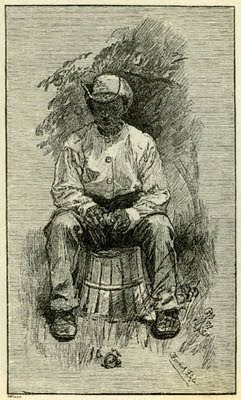 “There are few more beautiful sights than a peach orchard in full bearing, the vistas between the parallel rows of trees over-arched with dark green foliage, the verdant roof studded with ripe and ripening fruit, suggesting the gems of Aladdin’s cavern. Every where throughout the orchard are seen the figures of the ‘plucks,’ mounted on high step-ladders, drawing down the heavily laden branches of luscious fruit. Every where the air is burdened with the all-prevading [sic] fragrance of peaches.”

Howard Pyle enjoyed peaches, and he went to great lengths to ensure that his friends would enjoy them, too. A little over 114 years ago, during the height of Delaware’s peach season, he wrote this letter to Christopher L. Ward:

I am sending to Carrie by tomorrow (Tuesday) morning’s train a basket of specially picked peaches, gathered as nearly perfectly ripe as possible, so that you will have to get them without loss of time and spread them out so they may keep. They will not, I think, last more than twenty-four hours, but some of them may not be so perfectly ripe as that. I shall try to send them in care of the Baggage Master so that there will be no delay in your getting them. If I cannot do that, they will have to go by Adam’s Express, in which case you must get them from the express office as soon as may be. I think you had better have some one meet the morning train.

You still linger with us in odds and ends of conversation and in continual recollection, for your visit was a great pleasure to us. 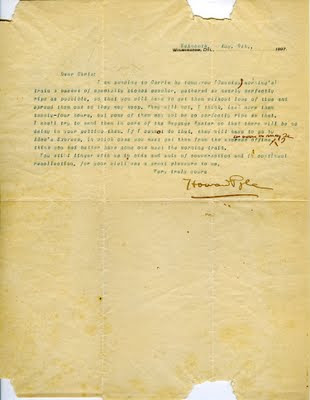 “Carrie” was Caroline Tatnall Bush Ward, Pyle’s onetime neighbor and model, who married “Chris” on May 5, 1897. As Pyle said in the same 1878 article quoted above:


The Delaware peaches are not an exotic growth, like the grapes of the same name, but a strictly local production, excelled by no other fruit of the kind in the world. The quantity of peaches raised in the peninsula is still constantly on the increase, as facilities for transportation and the increase of canning establishments open ever wider markets for their sale. The latest statistics number the peach-trees of the peninsula at about five millions, covering fifty thousand acres of the best and most productive land, and representing in money an invested capital of nearly three million dollars.

Of the fresh fruit shipped to the markets of New York, Philadelphia, and other cities of the Middle States, there passed over the Delaware Railroad, in 1877, 4248 car-loads - over two million baskets - while at least an equal quantity would find its way to market by water. This year's crop is much less in quantity, probably not more than half an average crop, owing to the untimely frosts of late spring - a fact that has probably already unpleasantly impressed itself upon peach-lovers by the comparative scarcity this season of this most delicious and satisfying fruit.

Posted by Ian Schoenherr at 8:09 AM