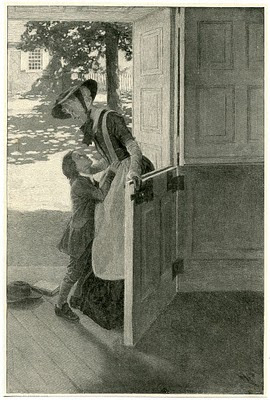 On September 23, 1896, Howard Pyle wrote to Dr. Silas Weir Mitchell regarding the illustrations for the novel, Hugh Wynne:


…I wish most heartily now that I had not undertaken to illustrate it. I quite agree with you that a story, especially one that is so dramatically told, is very much better without illustrations than with them - that is unless these illustrations be made to fill out the text rather than to make a picture of some scene described in it.

I do not feel that my ability in picture-making lies in illustrating stories. In such work I am hampered and confined by the text, and my talent (such as it is) can have no room in which to play. It has always seemed to me to be better to choose for an illustration some point, if possible, not mentioned directly in the text but very descriptive of the text.

For example, in the first instance I was compelled to choose the return of the little boy from school welcomed by his mother. This, while perfectly charming in your description of it, was not a subject one could very well depict. You gave the idea of cool, dark interiors and wide spaces. In making the drawing I had to limit myself to the open door and a small vista outside; for in making a drawing one must make it with what one sees with the eyes and not with what one sees with the mind and thought, as you make in the text. If the story which I was illustrating had been mine, I would rather have chosen some impersonal subject to be called, perhaps, “Mother and Son,” in which the mother, with her arm around the little boy, is walking down the dark room with such surroundings as you depict in the text.

There is no such scene mentioned in your story, but I think it would illustrate the feeling you intend to convey, and if correctly drawn, would carry forward the thought of the reader with some definiteness of purpose.…

Posted by Ian Schoenherr at 9:09 PM

Email ThisBlogThis!Share to TwitterShare to FacebookShare to Pinterest
Labels: 1896, Colonial, letters, on art, The Century Magazine