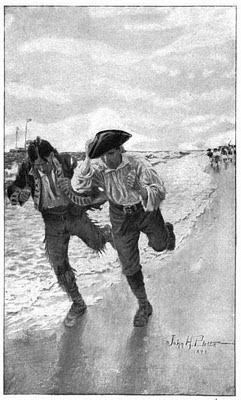 John Henderson Betts (born April 6, 1877) was one of Howard Pyle's more promising pupils at the Drexel Institute. His work was shown in the first exhibition of work done in the School of Illustration (1897) and Pyle featured one of his pictures in his article, "A Small School of Art" (Harper’s Weekly, July 17, 1897). Betts was also one of the ten students awarded scholarships to the first Summer School of Illustration at Chadd's Ford, Pennsylvania, in 1898. While there he made six illustrations for The Boys of Old Monmouth by Everett T. Tomlinson (Houghton, Mifflin and Company, 1898), including "They're After Us, John!" He appears in these two snapshots taken that summer, on the porch of Washington's Headquarters, where the male students boarded: 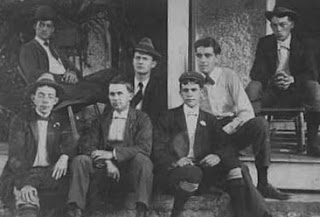 Coincidentally - and if my genealogical calculations are correct - John Henderson Betts was also the third cousin of his classmate Anna Whelan Betts (1873-1959) and her sister Ethel Franklin Betts (born 1878), both Pyle students. He married Mary Furman Smith on November 1, 1900.

Despite his promise, Betts is little remembered today, for on March 3, 1902, he came to a terrible end. The Germantown Guide for March 15, 1902, described what happened:


John Henderson Betts met a shocking death on Monday by falling down the elevator shaft from the eleventh floor of the Real Estate Trust Building, southeast corner of Broad and Chestnut streets. Mr. Betts was hurrying to keep an appointment with his father, Colonel Charles M. Betts, a wholesale lumber dealer, whose office is on the twelfth floor of the building. The only other passenger in the car was Mr. William A. Messinger, of Clayton, Pa., who alighted at the eleventh floor. He says he heard the doors of the elevator shaft behind him. Almost immediately after that he heard a noise as if the doors had been reopened, and a scream which caused him to look around in time to see Mr. Betts go headlong over the edge of the platform through the doorway and into the shaft. Albert F. Gault, the boy in charge of the elevator, said that just as he started the car Mr. Betts said something to the effect that he had passed his floor, and clutched at the doors. The lever was at once reversed and the next thing Gault knew his passenger had disappeared. The body was taken to the Morgue, where it was identified soon after, when it was removed to 2034 Spring Garden Street, the residence of the deceased's father, where the funeral services were held on Thursday morning. Mr. Betts resided with his wife, to whom he was married in 1900, on Pomona Terrace, and was in his twenty-fifth year. He was a graduate of the Friends' Central School, and four years ago finished a course under Howard Pyle, the celebrated illustrator, at the Drexel Institute. He at once established himself as an illustrator became very successful, having his studio at 430 Walnut street. Among the most conspicuous books he has illustrated are Edward Robins' "Washington and Braddock's Campaign" and "An Iron Horse Chase; or, a Boy's Adventures in the Civil War." Mr. Betts also illustrated John Habberton's "Some Boy's Doings," and had only recently completed four illustrations in color for Mr. Robin's "A Boy in Early Virginia." He also illustrated Charles Heber Clarke's "Captain Bluitt," and was engaged at the time of his death in the illustration of a magazine story by Julien Gordon (Mrs. Van Rensselaer Cruger). He had also contributed illustrations to the Century, Scribner's and other magazines.

Posted by Ian Schoenherr at 5:57 AM

I grew up in "Old Monmouth" (and am a history geek as well)and would love to find a copy of that book and see the illustrations of a promising life cut short. Tragic story.

Short of find a "real" copy of the book (which shouldn't be impossible, or too expensive), try this:

Very interesting article--I am the Director of Communications at Friends'Central. I have forwarded the blog post to our archivist to see what else we can find out. Seems we have always had quite good artists here--we just honored Elizabeth Osborne and our walls are covered with Hobson Pittman's work. I'll see if we have any of Betts's.

I hope you find something!

Ian, I am interested in any information you might have on another of Howard Pyle's students, Clyde DeLand. My mother was a cousin and he was very close to her family. I know of a few of his works(mostly historical oil paintings), and have many of the books. Can you help me?

I’d be happy to - email me via my Profile page. I don’t know how much I have on DeLand, but we can compare notes.

Thanks so much I learned some neat things. This was especially interesting to me as John Henderson Betts is my Great Great Uncle. I came across your article while serching for a December 7 1901 issue of The Saturday Evening Post. I have some original artwork of his that was used to illustrate the story "Touched" in the magazine I would love to have the documentation to go with the painting!

There was an array of Betts work for sale on Ebay via Williamsburg,

I have a wonderful DeLand depicting the Pilgrim's First Winter. I assume it was done as a calendar print? Any ideas.

I think the Betts material is still on the market - and it includes a few things done in Pyle’s class.

Is your DeLand in color? Care to send me a scan? I'm no expert, but I’d love to see it.

My mother and I purchased a painting at an auction years ago. We thought the painting was in poor condition and purchased the item for the frame. We took it home, cleaned it up, and it has hung on her wall ever since. It appears to be a hooded monk. I just took a look at the signature and googled it ("JH Betts '97") and found your blog. This is so interesting to read. Do you know where he was in 1897? I would be happy to take a picture and send it to you if you are interested in seeing it.

By all means - send a photo. This sounds very interesting!