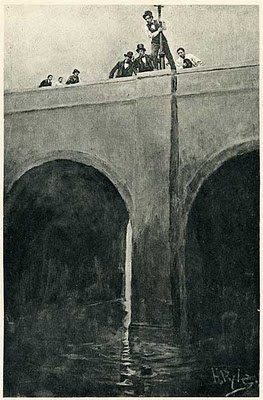 What a passion comes over us sometimes for silence and rest! - that this dreadful mechanism, unwinding the endless tapestry of time, embroidered with spectral figures of life and death, could have but one brief holiday! Who can wonder that men swing themselves off from beams in hempen lassos? - that they jump off from parapets into the swift and gurgling water beneath?

Despite the grim subject matter - a suicide - this is one of my favorite Howard Pyle pictures. It's "Into the River" from The Autocrat of the Breakfast-Table by Oliver Wendell Holmes, printed by the Riverside Press in the fall of 1893. The plate is so small - only 2.9 x 4.5" - and the paper has yellowed, but the fidelity of detail is there thanks to its having been reproduced in photogravure rather than in halftone. It illustrates the passage quoted above.

Pyle painted the original in black and white oil on 8 x 12" board in mid-1893 - possibly at "Delamore," the mansion on the edge of Wilmington where he had moved his growing family between May 9th and June 10th of that year.
Posted by Ian Schoenherr at 2:48 PM