He Would Shout Opprobrious Words... 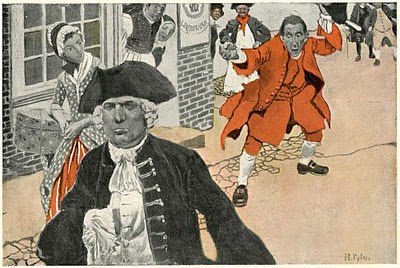 "He would shout opprobrious words after the other in the streets" illustrated "A True History of the Devil at New Hope" by Howard Pyle in Harper's Weekly for December 18, 1897. It appeared untitled in the magazine, but was titled thus when published (reduced and solely in black and white) in Pyle's collection of tales called Stolen Treasure (Harper and Brothers, 1907). Pyle's bibliographers named it "How the Devil Haunted the Meeting House" - but it is, more accurately, a headpiece for the chapter of that title or for the story itself.

Pyle must have painted the original (which is still out there, somewhere in the ether) in oils - probably on illustration board. The reproduction shows how much mileage his work could get from even the most rudimentary two-color printing. It also shows the strong Japanese influence on his art: the high horizon line, the flattened space, the absence of shadow, and so on. The "Japonisme" of Howard Pyle is not often acknowledged, but it certainly shows up again and again from the late 1870's onward.

I grew up a few miles from New Hope, Pennsylvania, the once-quaint village in Bucks County on the Delaware River. But, like it or not, Howard Pyle's "New Hope" is in Rhode Island.
Posted by Ian Schoenherr at 12:26 PM

Email ThisBlogThis!Share to TwitterShare to FacebookShare to Pinterest
Labels: Colonial

great insights! not to mention the strong diagonal!

interesting to me, it's even more obvious in the work of his students, but he was such an early proponant that that's not so surprising.