An Invitation from Howard Pyle 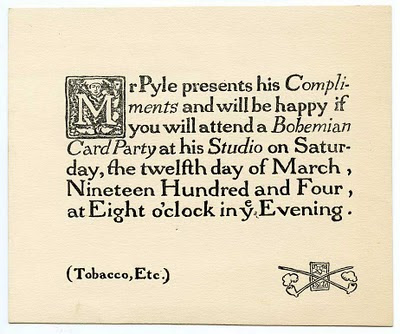 How would you like to have gotten this in the mail? It's an invitation - hand-lettered and decorated by Howard Pyle himself - for an event held 106 years ago tonight at 1305 Franklin Street, in Wilmington, Delaware. For those who trip over archaic ligatures and long s's, here is a transcription:


Mr Pyle presents his Compliments and will be happy if you will attend a Bohemian Card Party at his Studio on Saturday, the twelfth day of March, Nineteen Hundred and Four, at Eight o'clock in ye Evening. (Tobacco, Etc.)

A guest list has yet to surface, but one invitee was Henry Francis du Pont, 23, who later founded Winterthur Museum, and was the only son of Pyle's friend Colonel Henry Algernon du Pont. Young Henry brought along another guest, with the host's permission: "Any friend of your father’s son shall always be welcome under my roof," Pyle had assured him.

Pyle's students came, too, after having spent (according to Allen True) "a fine afternoon making things for the evening while [Pyle] painted at his mural decoration and swapped stories." True said they played "a very funny game called Muggins" and that "there was a fine crowd of young people - cards till about eleven when chafing dishes were spread around and we had a Dutch feed and some good singing. It was delightful all the way through and had a distinctive flavor very different from most occasions of the sort."
Posted by Ian Schoenherr at 8:30 AM