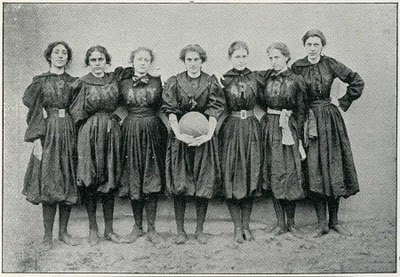 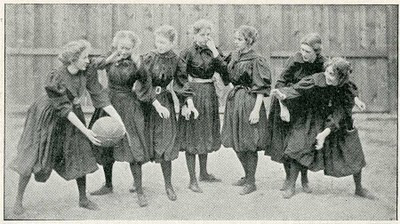 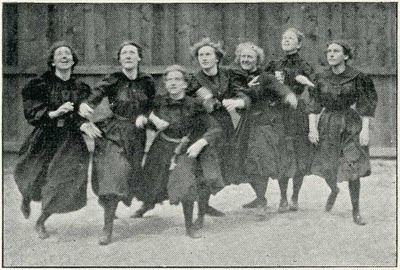 Why the Drexel Institute Women's Basket-Ball Team of 1897? Because these seven women were all art students (notice the word "Art" emblazoned on their uniforms) - and some of them were students of Howard Pyle. Maddeningly, however, they are not identified in the book from whence these photographs came - the 1897 Drexel yearbook called the Eccentric.

But there is someone I recognize. It's Pyle's pupil and future sister-in-law, Ellen Bernard Thompson. She's holding the ball in the first two shots and is in the very middle of the "action" scene. She was born November 11, 1876, in Germantown, Pennsylvania, studied with Pyle for several years and attended both the 1898 and 1899 Summer Schools at Chadd's Ford. There, she and Pyle's younger brother Walter met and fell in love. They were married in 1904. A huge show of Ellen Pyle's work was recently on display at the Delaware Art Museum (and I foolishly missed it) and some more about her can be found here. Of course, Ellen's daughter Caroline married N. C. Wyeth's son Nathaniel, thereby entwining the Pyles and Wyeths in the branches of the same gnarly family tree.

One more thing about the photos: the woman on the far left in the first shot, the far right in the second, and the far left in the third is, I think, Elfrida J. Lavino, who, as far as I know, was not a Pyle student. The fair- and frizzy-haired woman just to the left of Ellen in the first shot I believe is Paula Himmelsbach (not a Pyle student, either, but later a prominent painter and stained glass artist, and a teacher of Alice Neel). And the woman to the right of Ellen in that same photo might be Charlotte Harding (who was very much a Pyle student), but I'm not yet certain.
Posted by Ian Schoenherr at 10:02 AM