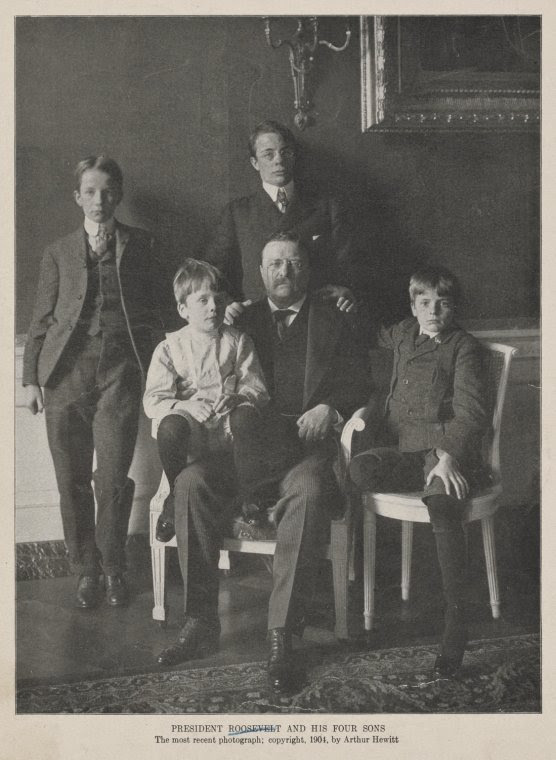 On March 19, 1904, Howard Pyle took the train down from Wilmington, Delaware, to Washington, D.C., for a 1.30 p.m. lunch at the White House. The meal was wedged in between President Theodore Roosevelt’s 11.45 a.m. chat with Admiral Dewey and a 2.30 p.m. meeting with Booker T. Washington. (I often wonder if Pyle met either men on his way in or out - though I should note that there were three other meetings scheduled between Dewey’s and Pyle’s). First thing that same day, Arthur Hewitt took several photographs of Roosevelt and his family, including the one shown above.

The purpose of Pyle’s visit was to talk politics: a Wilmington newspaper had asked him to write what he thought of Theodore Roosevelt's then two-and-a-half-year-old administration. “I have endeavored to do so as honestly and courageously as possible,” he told Roosevelt's secretary, William Loeb, on March 16, “but, now that it is done, I feel, in view of the fact that the President stands in the relation of a personal friend, I should submit the paper to him before publishing it - that is if you think he will care to see it.” Pyle figured that other newspapers might quote him, and he planned to expand the piece (which he also sent) into a magazine article - “Hence a certain added importance to the few words I have written.”

Roosevelt objected to some of Pyle’s unintentionally, yet interpretably critical comments and warned, “Anything that you say will be apt to be taken as the best that a personal friend can say for me, and therefore any condemnation from you will be received and quoted independently of anything that you say that is favorable.” So he asked Pyle to come and talk things over - and, presumably, get “on message.”

Unfortunately, as luck would have it, I haven’t yet found the article Pyle wrote and don’t know if it ever appeared in either the Wilmington newspaper or in the magazine; Pyle mentioned that The Outlook might publish it, but, in looking at 1904 issues, it seems that they didn’t. I'll keep looking.

Below is the page from Roosevelt’s datebook for March 19, 1904 (please pardon the scratchy printout from a microfilm reel at the Library of Congress). 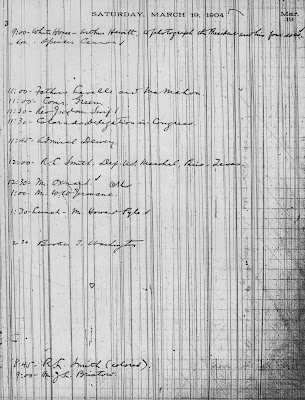 Posted by Ian Schoenherr at 3:24 PM