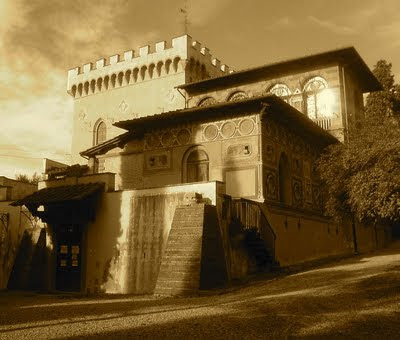 STIBBERT MUSEUM, housed in the Villa Stibbert, at Montughi, about a mile and a half beyond the Porta San Gallo. Open on Tuesday, Thursday, and Saturday for a fee of 1 fr., and on Sunday mornings free. This collection, consisting chiefly of mediaeval armour and of costumes, was formed by the late Chevalier Stibbert, an English subject residing in Florence, who on his death in 1906 bequeathed his valuable collection to the city. The Museo Stibbert was formally opened in May, 1909. (from Florence and her Treasures by Herbert Vaughan, 1911)

Sometime between 9 a.m. and 1 p.m. on Sunday, May 14, 1911, Howard Pyle and an Italian friend visited the Stibbert Museum (or the Museo Stibbert) on the hill of Montughi in Florence. A few days later he wrote about it to Frank Schoonover:


It is really quite wonderful to see it. Many of the suits of armor are filled with models of the period. I think that which interested me perhaps more than anything else was a general of 1700, with a lace coat, jack boots and cuirass complete.* I never saw such an aggregation of interesting old things. Hundreds, yes, thousands of swords, crossed everywhere upon the wall, and bits of armor in all conditions, from the banged and ancient armor eaten through with rust, dug up out of the ground, to the finely polished, carefully preserved armor of the Italian nobles. All kinds of arquebuses and cross-bows, some of them inset with beautifully carved ivory or mother-of-pearl. All over the front of the building was inset with coats of arms and scutcheons, dating back to the thirteenth and fourteenth century. In front were some fragments of Venetian carved marble, and a very beautiful marble well.

(* If I can track down that general, I’ll post a link or a picture.)
Posted by Ian Schoenherr at 8:52 AM

Email ThisBlogThis!Share to TwitterShare to FacebookShare to Pinterest
Labels: 1911, Italy