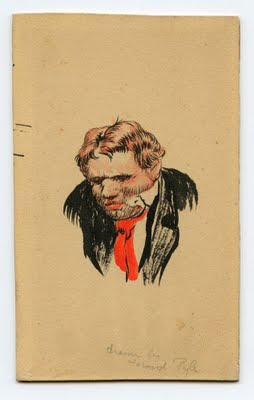 Little is known about this Howard Pyle sketch, but I don’t doubt its authenticity. While the “modern day” costume of the disheveled, Charles Laughton-like character is unusual, it’s not unique, and the pen and brush work is fairly typical for Pyle circa 1900 - the quick strokes defining the hair, for example, and the rendering of the flesh, not to mention the deft wash of red.

It’s not signed, unfortunately, and the pencilled note “drawn by / Howard Pyle” is not in Pyle’s handwriting. Scrawled on the back we see that it was the property of Emlen McConnell of Haddonfield, New Jersey. Whether McConnell himself wrote this is in dispute - it looks more like “Emelin McConnel” to me - but perhaps he loaned it for exhibition and the exhibitor wrote the note. I just don’t know. The other names written on the back don’t yet ring a bell, either.

McConnell, though, who was born August 2, 1872, in Philadelphia and spent many years in Haddonfield, was a Pyle student of the Drexel days, who also attended both Institute-sponsored summer sessions at Chadd’s Ford in 1898 and 1899. So perhaps the drawing was something McConnell acquired while under Pyle’s tutelage. 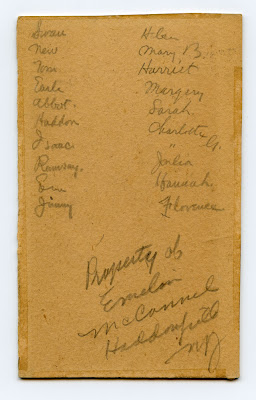 Posted by Ian Schoenherr at 8:39 AM