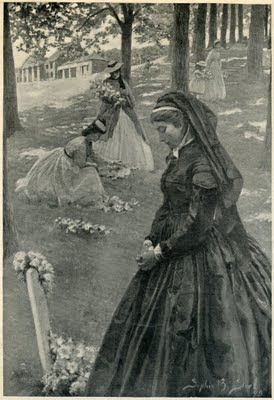 “In Memoriam” by Miss Sophie B. Steel

Last year on St. Valentine’s Day I posted an article about the holiday written by Howard Pyle and illustrated by Anne Abercrombie Mhoon. As I mentioned in that post, Pyle often had his Drexel Institute students make compositions with seasonal themes and then submit the results to art editors of various periodicals. The ones deemed best would be worked up for publication. Sometimes these pictures required no words to explain them and other times text would be provided - very occasionally by Pyle himself. And so, on this Memorial Day, here is Pyle’s “Decoration Day” from Harper’s Bazar of May 28, 1898. About the same time that this came out, the picture illustrating it - “In Memoriam” by Sophie Bertha Steel - was shown with the title “Decoration Day in the South” at the Second Exhibition of the School of Illustration at the Drexel Institute. Steel, born in 1870 in Pennsylvania, was awarded a scholarship to Pyle’s first summer school at Chadd’s Ford, and later illustrated Historic Dress in America, 1607-1870 by Elisabeth McClellan and taught illustration at the School of Industrial Art in Philadelphia. For many years she lived in Surrey, England.

For several years after the close of the civil war, and before “Decoration day” had been dedicated to the memory of the army of silent thousands who had given their lives that the Union might live - for several years before the observance of Memorial day had become a custom in the North - some such commemorative period had been observed in the South, in so far that it had become the custom upon certain appointed times for the women of that section - the mothers, the wives, the children of the Southern dead - to strew the graves of their fallen soldiers with flowers, typical of those sacred memories that still surrounded the lost and loved ones who had fallen for the Lost Cause.

At that time the outward signs of that flaming and bitter strife were still fresh and new. The bosom of nature, ploughed by the iron of war, had not yet healed. Everywhere were smoke blackened and shattered shells, each, one time, the patriarchal mansion of some great slave-holding planter; woods and glades were thinned out by the storm of shot and shell that had torn through them with iron hail; in one place or another long rows - rank upon rank - of shallow mounds stretched up hill, along the level, through the woodlands, battalions of graves hardly yet covered with the thin young grass. Upon a dozen battle-fields were great cemeteries, each consecrated with its baptism of blood, and there North and South lay in stillness, soldiers stretched side by side, in a fraternity never to be broken, because the Angel Israfeel himself had set his seal of silence upon it all.

It was to these battle cemeteries, greater or lesser, that the women of the neighboring country brought their offering of flowers. There is something very full of pathos in the thought of those poor Southern women who had suffered so much and who had endured to such a bitter end - of those patient women of grief bringing their harmless offerings of flowers to these stern and furrowed fields of death, there to lay the fading things upon the bosom of each mound. For the North, it is said, was remembered at those times as well as the South. One cannot but hope this may be true, for it is beautiful to think of one woman of sorrows in the South reaching out an unseen hand to some other and unknown woman of sorrows in the faraway North.

It seems to me that this is distinctly the thought that Miss Steel has caught in her picture of the Southern woman standing with patient, introspective grief over the one precious flower-strewn grave at her feet - the thought of the sisterhood of woman’s suffering.

Thus it was that the observance of Memorial day began. But it was not until 1868 that General John A. Logan - then commander-in-chief of the Grand Army of the Republic - issued orders that on the 30th of May of that year all posts, East and West, should decorate the graves of their comrades in arms who had baptized the renewed Union with their own hearts’ blood.

Still later the Legislatures of the different States took up the matter, and so at the present time it has grown to be both a national and a legal holiday in almost all the States and Territories of the Union.

This year is the thirtieth anniversary of the nation’s commemoration of its sacred dead.
Posted by Ian Schoenherr at 11:27 AM