Washington is Notified of His Election 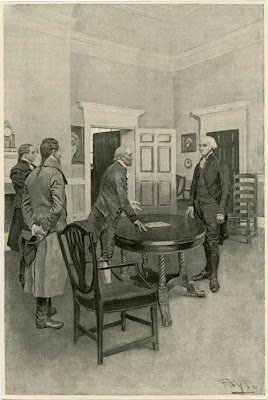 
In thinking over the subject for this Sixth Washington Article, I would suggest, by your leave, the following:

1 Thomson, the clerk of Congress, bringing to Washington the official papers notifying him of his election. It seems to me that this is a very good point and I am going on with it now.

Two gentlemen came down from Alexandria along with Thomson and were present during the interview, Thomson addressing the General in a formal speech, to which he replied in as formal a fashion, accepting the honor done him....

Not long after writing (days, maybe, or a week or two), Pyle completed “Thomson, the Clerk of Congress, announcing to Washington, at Mount Vernon, his election to the Presidency,” which illustrated Wilson’s “The First President of the United States” in Harper's New Monthly Magazine for November 1896. When Pyle exhibited the painting in his one-man-shows at the Drexel Institute in Philadelphia and the St. Botolph Club in Boston in 1897, he described it in this deliberately archaic-sounding way in the catalogues:


The Clerk of Congress Announcing to Washington his election to the Presidency.

Here the Hero is depicted receiving with that calm Reserve that befitted him so well, the Announcement of his Election to the Chief Magistry of our Nation. The sealed Packet lies upon the Table, while Charles Thomson, Esq., addresses the great Man in Terms of respectful Congratulation. The other Figures represent two Gentlemen of quality who accompanied Mr. Thomson from Alexandria upon his grateful Mission.

But here’s how Wilson described the scene:


...on the 7th [of April, 1789] Charles Thomson, the faithful and sedulous gentleman who had been clerk of every congress since that first one in the old colonial days fifteen years ago, got away on his long ride to Mount Vernon to notify Washington of his election. Affairs waited upon the issue of his errand. Washington had for long known what was coming, and was ready and resolute, as of old. There had been no formal nominations for the presidency, and the votes of the electors had lain under seal till the new Congress met and found a quorum; but it was an open secret who had been chosen President, and Washington had made up his mind what to do. Mr. Thomson reached Mount Vernon on the 14th, and found Washington ready to obey his summons at once.

The relative brevity of this passage calls to mind Pyle’s comments to Paul Leicester Ford:


...the historic writer has a great advantage over the draughtsman, in that he need not necessarily state the most minute point in his work. If he is uncertain as to any single part, he may slur that and pass on to something else. The illustrator must have everything as perfectly accurate as he can render it, for the picture represents not only the general description, but a description so particular that it may take pages upon pages to fulfill it in literature.

The original painting belongs to the Boston Public Library.
Posted by Ian Schoenherr at 7:28 AM