The Press-Gang in New York

Not all of Howard Pyle’s illustrations just “fell off his brush” - I mean, where his concept was vivid enough that he could go straight from hurried thumbnail sketch (or 50, according to legend) to final art. Sometimes he had to do a little more homework. And although there are some relatively careful preliminary studies from his more mature period - like this one from 1902 - he probably made many more of them in his earlier years, when he was less sure of himself. Like this one, which comes from the Brandywine River Museum: 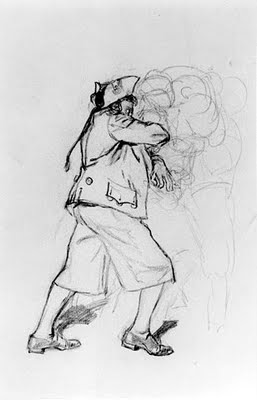 And this one, which was bound into a volume of Pyle’s collected illustrations: 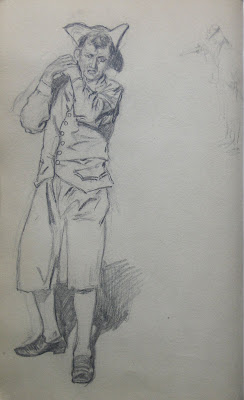 Pyle made both in preparation of his illustration “The Press-Gang in New York” for “Old New York Coffee-Houses” by John Austin Stevens. Here it is as engraved by Smithwick and French, from Harper's New Monthly Magazine for March 1882: 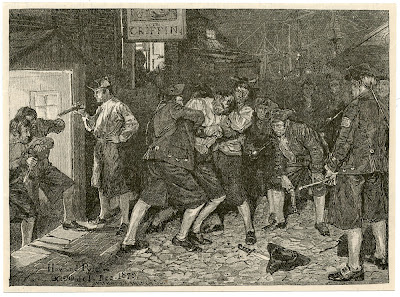 Pyle had completed (and conveniently dated) the work over two years earlier, in December 1879. He was 26, then, living with his parents and siblings at 714 West Street in Wilmington, Delaware, and working in a studio rigged out on the top floor of the family house. He probably worked on this picture there and may have gotten his brothers, Cliff (22) and Walter (20), to pose for him (the second study suggests that he only had one model posing at a time, however).

Fortunately, Pyle’s original black and white gouache also survives in the Mabel Brady Garvan Collection at Yale University, where it’s called “At the Sign of the Griffin.” 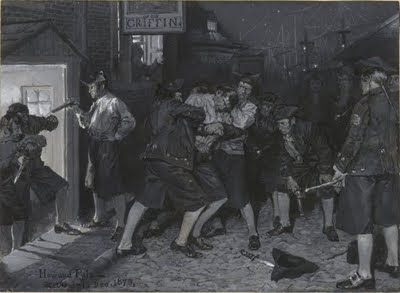 That might be their title or one Pyle scribbled on the back, but in December 1880 the painting was exhibited as “The Press Gang” in the Salmagundi Sketch Club Black and White Exhibition at the Academy of Design in New York. The sculptor Augustus Saint-Gaudens, by the way, wrote a letter complimenting Pyle on his work there. “I am happy that you found anything to give you satisfaction in my drawings [sic] in the Salmagundi,” Pyle replied. “I hear there are plenty of them and what they lack in quality may be made up in quantity - like New Jersey Champagne.”
Posted by Ian Schoenherr at 8:36 AM