In his memoir, A World Worth While: A Record of “Auld Acquaintance”, illustrator W. A. Rogers said:


In looking over an old file of Harper’s Weekly the other day I came across a picture of Colonial life under which was printed, “Drawn by E. A. Abbey from a sketch by Howard Pyle.” That was before Pyle’s wings were strong enough to enable him to fly alone. It was in the days when most of the work was drawn on wood, and Pyle never was successful in working on the block.

“Entangled” is the picture Rogers mentions. “This was redrawn by Abbey from my original drawing,” Pyle noted in his scrapbook. “My drawing was made before I left Wilmington and was accepted as an ‘idea’. I got, I think, twenty dollars for it.” After Edwin Austin Abbey tightened it up, Victor Bernstrom engraved it for the January 19, 1878, issue of Harper’s Weekly. An accompanying paragraph explained:


The costumes and accessories in our engraving on page 52 show that the artist designed to represent a scene in an American country house of the last century; but the story suggested suits all times and countries. The tell-tale chairs placed cozily side by side, the evident embarrassment of the young gentleman, in spite of his effort to look cool and unconcerned, and as if he had been leaning all the morning against the mantel-piece, are quite perceptible to the keen glance of the maiden’s father as he comes into the room. Likely enough he is a loyalist, while the suitor for his daughter’s heart and hand may be the son of a patriot. Out of this hint every reader may weave a romance for himself.

“Entangled” was published just when Pyle’s early career was turning a corner, when publishers - and fellow illustrators, like Abbey - were beginning to take him seriously. 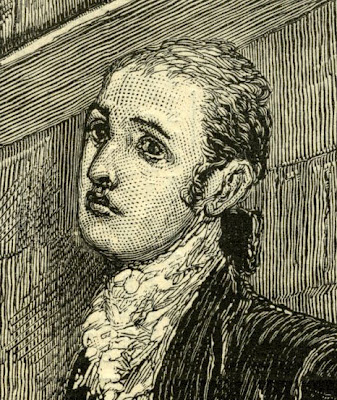 And in looking at this picture again, I feel more and more convinced that in redrawing Pyle’s picture, Abbey used Pyle himself as the model for “the young gentleman.” There’s something about the height and body language and the shape of head and brow, the texture of the hair, the sideburns, the way the hands are tucked in the pockets... Not many photographs of a twenty-something Pyle have turned up, but take a look at these two - maybe you’ll see what I mean.