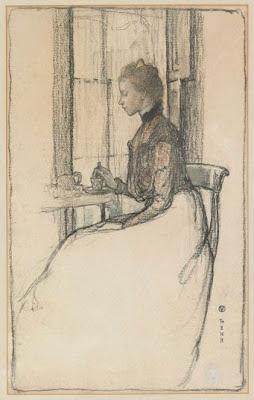 In 1872, Howard Pyle, 19 and fresh out of art school, rented a room in the Grand Opera House in Wilmington and advertised that he would teach “drawing, sketching, and painting in oils.” Whether anyone took him up on the offer is still in question, however. Not long after his mother’s death in 1885, Pyle took his sister Katharine under his wing and into his studio and helped establish her career as an illustrator. And then in May 1894 he accepted a teaching position at the Drexel Institute in Philadelphia. But even before Pyle began his course on “Practical Illustration” that October, he agreed to help another artist.

Her name was Elisabeth Moore Hallowell (1861-1910) and today is the 118th anniversary of her first lesson with Pyle. She initially approached Pyle by letter on June 14, 1894, and he replied the next day:


I do not know just how much assistance I could be to you in the matter of pen drawing. It is a medium which I use but very little, except for the lighter and more decorative kind of illustrative work. If I can help you I shall be glad to do so.

He added that “if you could bring your work to me every week, say, on Saturday afternoons, I would be very glad to criticize it for you and to give you such suggestions as I can - I shall not charge you anything for such criticism.” Then - on 19th - Pyle told her to meet him on Saturday, June 21st at his then-residence, “Delamore Place,” an airy old mansion at the corner of Clayton and Maple Streets. I gather he didn’t have her come to his studio either for propriety, or because he only worked till midday on Saturdays, or because he was doing a lot of work at home at that time (a number of his illustrations from 1893-96 are indeed set at Delamore).

Whether Miss Hallowell did in fact see Pyle every Saturday that summer is in doubt: he went on a whirlwind trip, for instance, to Onteora, New York, in late June or early July 1894, and also spent days and maybe weeks at a time at his family’s cottage in Rehoboth, Delaware. Evidently, however, she did make periodic visits: on September 20th, for example, Pyle wrote that he could probably see her on the 29th, but that “I should like you that time to come to my studio instead of my house. You will find me there between the hours of three and five. The address is 1305 Franklin Street.” 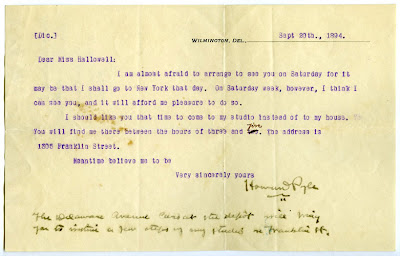 Subsequently, Hallowell continued to seek Pyle’s help both informally and at Drexel, where she attended his classes: in a January 1896 letter, for example, Pyle said, “I will try, unless I miss my train, to be at your room at nine o’clock, and will give you an hour’s criticism between then and ten o’clock.” And although primarily a botanical artist, she made at least one Pylesque illustration - “Betsy Ross Making the First American Flag” - for Leslie’s Weekly in 1896. Surely, this was produced under Pyle’s influence - if not his direct supervision. But it’s not clear how long their association continued. In 1897 the Macmillan Company announced the publication of Hallowell’s Elementary Drawing: A Series of Practical Papers for Beginners and touted it as “a very practical interesting book, with suggestions as to the best methods of grouping, management of light and shade, and other essentials of composition, all intended to give reliable help to students who are filling their first sketch-books.” I haven’t seen the book, or her articles in The Art Amateur which composed it, but perhaps some of it came out of what she learned from Pyle.

Hallowell later taught pen and ink drawing and was “Instructor in Charge of the Class in Illustration” at the Philadelphia Museum and School of Industrial Art. In 1902, she married author-naturalist-traveler-botanist-historian (etc.!) Charles Francis Saunders (1859-1942) and the two collaborated on a number of projects. In 1906, for the sake of for Elisabeth’s health they moved to California, where she died at age 49.

Incidentally, the portrait of Hallowell shown above was drawn by Violet Oakley, one of Pyle’s most celebrated Drexel students and, it seems, Hallowell’s friend.
Posted by Ian Schoenherr at 3:33 PM