On “The Story of Adhelmar” 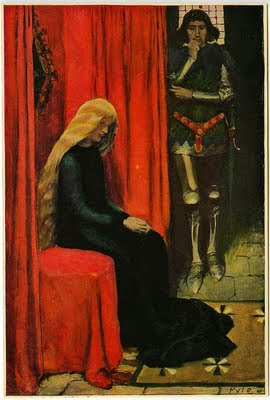 “I am most pleased that my illustrations for your Story of Adhelmar should have met with your approval,” wrote Howard Pyle to James Branch Cabell on June 12, 1904. “A good story is always a great inspiration for an illustrator, and I hope I may have the pleasure of illustrating many more of yours.”

It’s funny, though: Pyle’s three pictures for “The Story of Adhelmar” weren’t so inspired. John K. Hoyt’s criticism of Pyle (which I’ve reprinted in full) zeros in on two of them. Of “He found Mélite alone” Hoyt wrote:


Here we have a wooden image sitting, garbed in the habiliments of a woman, with a heavy mat of jute, in lieu of hair, falling from her head to her waist. The figure is devoid of any lines indicative of feminine grace; it might be the figure of a boy - a wooden boy. The arms in those sleeves are not made of flesh and bones and muscle, but of good solid oak. The expression of the face betokens intense, sullen stupidity. A knight clad in armor stands in the doorway, leaning against the jamb for support, evidently bereft of strength - as well he may be - at the ugliness of the thing.

Meanwhile, “He sang for her as they sat in the gardens”...


...represents a woman with a faded, washed-out face; a silly, simpering face; and whose right side has been developed at the expense of the left. And then, while gazing, one is stricken with deep compassion, as he perceives that this poor creature has curvature of the spine, and he wonders how, under the circumstances, she can even simper. In this figure also there are no lines to indicate the sex. 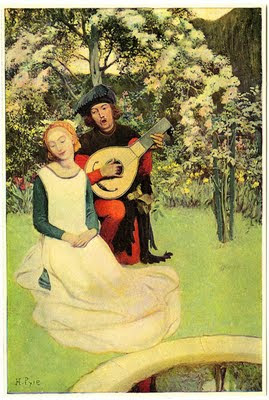 “These two compositions are enough to drive the luckless author of ‘The Story of Adhelmar’ frantic,” Hoyt went on. “And if he has survived the sight of them, he is doubtless now going about in quest of the artist and thirsting for his gore.” Cruel assessments, perhaps, but he makes some good points.

Even so, the “luckless” Cabell was pleased with the set of illustrations and had written to Pyle on March 27, 1904: “I wish that I could properly express my admiration for the magnificent pictures you have made for the ‘Story of Adhelmar.’ But as I cannot, will you not take the word for the deed?” Pyle’s letter of June 12th (quoted above) was in response to this praise.

That same June, however, Pyle wrote to editor Thomas Bucklin Wells of Harper’s Monthly Magazine, “Again let me urge you not to send me too much medieval work.” But Wells seems to have ignored the request (or Pyle didn’t stand firm) and after another three years of illustrating Cabell and many other seemingly middling authors, Pyle complained to Wells on April 23, 1907:


I am in great danger of grinding out conventional magazine illustrations for conventional magazine stories. I feel myself now to be at the height of my powers, and in the next ten or twelve years I should look to do the best work of my life. I do not think that it is right for me to spend so great a part of my time in manufacturing drawings for magazine stories which I cannot regard as having any really solid or permanent literary value. Mr. Cabell’s stories, for instance, are very clever, and far above the average of magazine literature, but they are neither exactly true to history nor exactly fanciful, and, whilst I have made the very best illustrations for them which I am capable of making, I feel that they are not true to medieval life, and that they lack a really permanent value such as I should now endeavor to present to the world.

Of course, when Pyle wrote that letter, he only had four and a half years to live - not ten or twelve - and - despite his protestations - he and Harper’s Monthly continued on a similar path until his death. 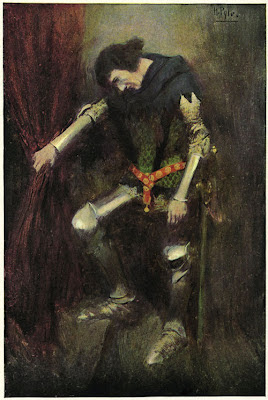 “He climbed the stairs slowly, for he was growing feeble” by Howard Pyle (1904)

Posted by Ian Schoenherr at 5:01 PM