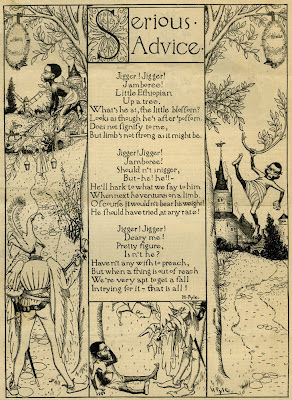 I remember when I first saw this illustrated verse by Howard Pyle: I thought, “Wait a second - THIS isn’t in Pepper & Salt!”

No, it isn’t. It almost seems like a weird-alternate universe-racist parody of Pyle. But, unfortunately, it is, indeed, his handiwork, and one that shows an ugly side of him and the world he lived in.

Yes, for some reason, Pyle made it and Harper’s Young People printed it in their June 24, 1884, issue. But somebody had a change of heart, and it was the only piece of its kind that didn’t make it into Pepper & Salt when it was published sixteen months later. A good thing, too - I mean, that it was suppressed and didn’t live on in book-form. For better or worse, though, I wanted to show it and air some of Pyle’s dirty laundry. There’s not a lot, but the little there is is still cringe-inducing and unforgivable.

And, of course, Pyle also had to immortalize himself in the illustration: the mutton-chopped jester and adviser to the “Little Ethiopian” is Pyle himself. In fact, the two images are his earliest known self-portraits. Compare them with a photo taken at about the same time: 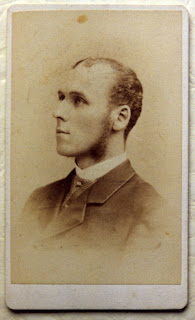 By the way, Pyle-as-jester turns up again in another illustrated verse, “Venturesome Boldness” (Harper’s Young People for August 26, 1884), and later in Pepper & Salt itself - in the frontispiece and the headpieces for the Preface and Table of Contents.

The original pen-and-ink for “Serious Advice” resides at the Delaware Art Museum, but I don’t know how often it sees the light of day.
Posted by Ian Schoenherr at 7:10 PM