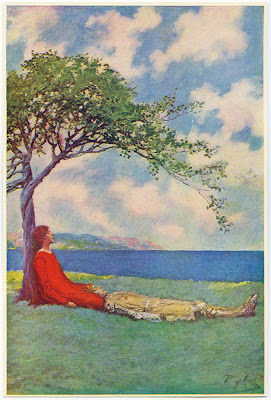 It’s a beautiful day, so here’s a beautiful Howard Pyle painting of a beautiful day. The reproduction is dodgy and the original painting is missing, so who knows what the colors really are, but they’re still effective and the composition is unusual and interesting.

Pyle painted “He lay awhile conscious of great comfort" for Justus Miles Forman’s “The Island of Enchantment” in the October 1905 issue of Harper’s Monthly Magazine. It later appeared in the book of the same title. So far, I’ve found no record of it being exhibited; maybe Pyle sold it soon after it was published.

It’s always useful to compare Pyle’s results with the text, so here is Foreman’s description of the scene:


That his eyes opened upon blue sky instead of upon painted or carved ceiling roused in him no astonishment. In service against the Turks and against the Genoese he had often slept in the open, waking when the morning light became strong enough to force its way through his eyelids. He lay awhile, conscious of great comfort and bodily well-being, coming slowly and lazily into full possession of his faculties. The air was fresh and warm, with a scent of thyme in it, and from somewhere in the near distance sea-birds mewed plaintively, after their kind. He dropped his eyes from the pale-blue sky and saw that though he lay upon turf - a hill it would seem, or the crest of a cliff - there was a stretch of tranquil sea before him, a narrow stretch, and beyond this a mountain range looming sheer and barren from the water's edge.

The sun must be rising behind it, he said to himself, for the tips of the serrated peaks glowed golden, momentarily brighter, so that it hurt his eyes to watch them. He wondered what mountains these could be, and then, all in a flash, it came upon him where he was - that this was Arbe, and that ridge the Velebic mountains of the main-land....

The woman who had saved his life half knelt, half sat behind him, and upon her knees his head had lain. At this moment she was leaning back a little, with her head and shoulders against a small tree which stood there, and her eyes were closed as if she were asleep.

Posted by Ian Schoenherr at 8:49 AM