Assassination of William of Orange, 1900 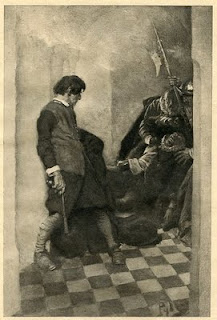 In looking over the majority of my Howard Pyle posts, I see that I’ve been unconsciously featuring his “modern day” illustrations. Maybe it’s because I don’t think they’ve ever gotten their due. So, to placate those who want to see more of his “historical” work, here’s one that doesn’t get out too often.

It’s “Assassination of William of Orange” from The Rise of the Dutch Republic in the Volume Five (of 17!) of The Writings of John Lothrop Motley (New York: Harper and Brothers, 1900). Pyle contributed only one illustration to the set, so it’s not the easiest picture to get a hold of, and, so far, I’ve only found only one place where he mentions it. In a February 25, 1907, letter to Merle Johnson, Pyle passingly refers to the Motley volume “for which I made one rather poor drawing.” I respectfully disagree!

The original (probably oil on board) has yet to surface, but the photogravure plate measures 4.9 x 3.3 inches.
Posted by Ian Schoenherr at 7:45 AM

Email ThisBlogThis!Share to TwitterShare to FacebookShare to Pinterest
Labels: 1900, Harper and Brothers, oil

Should anyone be interested I have the complete 17 volume set including volyme five with this illustration which was personally signed by Howard Pyle. Kevin Coleman eureka95503@hotmail.com