A number of Howard Pyle's major works are surprisingly under-documented. For example, his painting "Christmas Morn" which was issued as a supplement to the Chicago Tribune for Sunday, December 20, 1903. Its appearance in the newspaper coincided with a major exhibition of Pyle's works at the Art Institute of Chicago, which, in turn, coincided with a couple of lectures Pyle delivered there. The original has yet to appear, but I assume it's a fairly large oil on canvas, which took a fair amount of time to paint. Somehow, though, I've found no mention of it in Pyle's (or anyone else's) correspondence. Then again, the same can be said of another major work - and another depiction of Christ, and practically a companion piece to "Christmas Morn" - called "Why Seek Ye the Living Among the Dead" which appeared in Collier's Weekly for April 15, 1905. 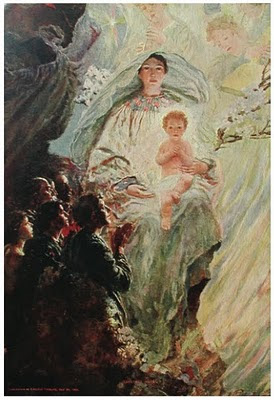 Posted by Ian Schoenherr at 9:54 AM

You mention Pyle's correspondence fairly often. I'm trying to research how Pyle did his historical research, for period costuming in particular, and have only turned up a few original letters at the Delaware Art Museum. Admittedly, I've only been looking for a short time. But is there a significant collection of letters in any one place or are they widely scattered? The librarian at the DAM is relatively new and young (though an avid Pyle fan) and really couldn't tell me.

Yes, unfortunately, Pyle's correspondence is scattered far and wide and I went on a mission almost (yikes!) 20 years ago to track down whatever was out there. And still I've only scratched the surface. Granted, there are large-ish collections of letters in public and private hands, but nothing like the scope of what, say, N. C. Wyeth wrote home.

Are you looking for Pyle's sources for period costumes? He had several key volumes in his library, some of which now reside at the DAM, and some he mentioned in his letters. And he accumulated scores of other prints and illustrated - and unillustrated - books to round out his knowledge. He also made it a point to acquire surviving costumes or to have some made to his specifications. I gather you know most of this - but I'd be happy to elaborate.

Hello Ian, just wanted to say this is a great site. Thankyou for all the hard work!!