A detail from "The Landing of Carteret" by Howard Pyle

After resigning from McClure's Magazine in the summer of 1906, Howard Pyle threw himself into work on “The Landing of Carteret”, his mural for the Essex County Court House in Newark, New Jersey. It had been commissioned by architect Cass Gilbert and was the largest thing Pyle had yet tackled - about six feet high and 16 feet wide - and it was supposed to be completed and installed by the end of the year.

On October 16, 1906, Pyle anxiously wrote to fellow muralist Edwin Howland Blashfield, “my work upon my picture has hardly advanced beyond the elementary stages.” But by December 1, he was able to report to Cass Gilbert, “I have laid everything else aside and have been working unremittingly upon it Sundays and holidays as well as other days. I now hope to have the painting completed, D.V., perhaps by the 15th and almost surely by the 20th of the month.”

On Sunday, December 16, Gilbert and his wife inspected the painting in Wilmington. Pyle was still at work, however, as on the following day he wrote the following letter to sculptor Thomas Shields Clarke:

I do not know how I can sufficiently thank you for the most interesting document with seals attached which you sent me.

It is exactly the kind of thing which interests me and you have guessed it as by intuition[.]

Not only is it valuable to me in itself but it came just at the opportune moment when I wanted precisely such a detail to put into my picture of the Landing of Carteret, which I am painting for the new Essex Co Court House.

Sometime, perhaps, you may see it in the picture.


According to news reports, Pyle finished the mural on Christmas Eve, but for all the hurry it wasn’t set in place until March 9, 1907.

I first encountered the above letter in 1992 and had despaired of ever figuring out who “Mr Clarke” was, but I just learned that Thomas Shields Clarke also gave “seven old vellum documents, with very interesting seals” to his alma mater, Princeton University, according to the Princeton Alumni Weekly for May 26, 1909. Below is a scan of the original letter which features what Pyle called his “dreadful chirography.” 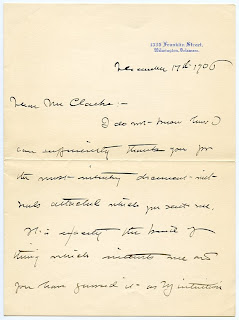 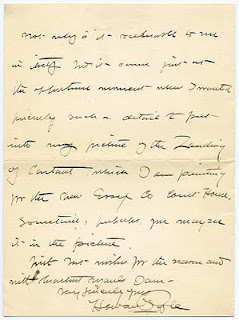