Here is a photograph of Clifford Warren Ashley - wearing a smock - and Henry Jarvis Peck in their studio at 1616 Rodney Street, Wilmington, Delaware. The relative spareness of the space suggests that it was taken in the spring of 1906, soon after they had moved in (plus the painting on the easel is Peck’s “Swiftly He Put the Questions” for "=“Love in the Mist” by Clare Benedict, printed in Harper’s Monthly Magazine for October 1906 and illustrators generally needed to deliver finished art a few months before publication).

The other occupants of the newly erected building (now known as Schoonover Studios) were all “graduates” of the Howard Pyle School of Art: N. C. Wyeth, Arthur True, Harvey Dunn, Stanley Arthurs, and Frank Schoonover. Perhaps one of these men was the photographer.

Incidentally, on the wall behind Peck hangs a large print of Pyle’s “Lady Washington’s Arrival at Headquarters, Cambridge” (1896). A modern photo of the studio from a similar vantage point can be seen here. 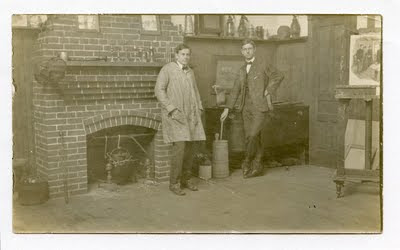