A Child Sunburned in December 1881

As I mentioned in an earlier post, it’s nice, if rare, to put an exact creation date on a work by Howard Pyle. In so many cases, we only know the publication dates, but those can be misleading: a Pyle fable (also already mentioned) written in late 1876 took nine years to appear in print, as did his article “A Peculiar People” written in late 1880 and published in 1889. These are extreme cases, of course, but the crazed stickler for accuracy in me bristles even when I can’t pin down a date to within a few months. Pyle sometimes dated his pictures, but for the most part we have to rely on his patchy correspondence to figure out when he was working on what.

Now here’s piece of good fortune: it’s the actual bill (transcribed below) that Pyle sent along with a completed illustration to Emily Sartain, art editor for Our Continent, a short lived magazine published in Philadelphia. (A fascinating figure in her own right, Emily Sartain was an artist and an engraver, a friend of Mary Cassatt, and had once been romantically linked with Thomas Eakins.) 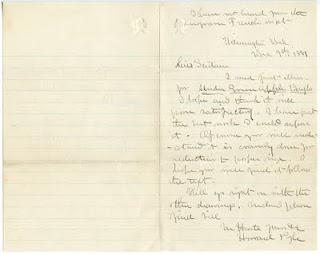 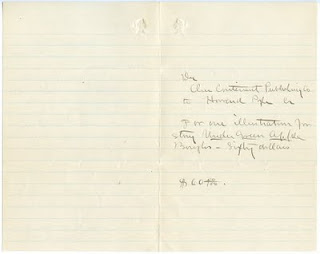 The $60.00 illustration was “A child sunburned, and with many fluttering shreds of raiment” for Helen Campbell’s “Under Green Apple Boughs” and it appeared in the very first issue of Our Continent for February 15, 1882. The 5.2 x 5.8" wood engraving was by Frederick Juengling. The original art has not yet materialized, but two of its companions have, so no doubt it was a black and white gouache, measuring somewhere in the range of 12.5 x 13.5" to 13.5 x 14.75". 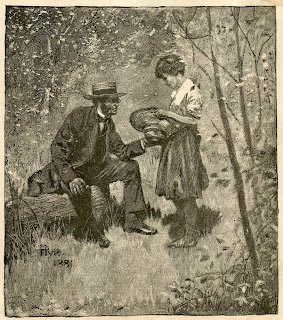 I have not heard from the engraver French as yet [Note: Frank French engraved the second, fourth, and sixth illustrations in this series]

I send first illus. for Under Green Apple Boughs

I hope and think it will prove satisfactory. I have put the best work I could upon it. Of course you will understand it is coarsely done for reduction to proper size. I hope you will find it follows the text.

Will go right on with the other drawings. Inclosed please find bill

In Haste Yours &c

For one illustration for story Under Green Apple Boughs - sixty dollars