It’s nice - and all too rare - to put an exact creation date on a Howard Pyle illustration. On November 28, 1876, Pyle, then living in New York, wrote to his mother, back home in Wilmington: “I was at work today making some comic Illustrations, as I want to make some money between now and Christmas. The first was called ‘Bliss’; it represents a diminutive gamin with his head buried under the sunbonnet of as diminutive a little girl.” The drawing appeared in the Bric-a-Brac section of Scribner's Monthly for May 1877. The Delaware Art Museum owns the original 5.5 x 5.9" ink drawing. 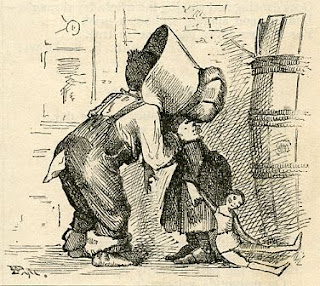 Posted by Ian Schoenherr at 1:23 PM

This is a great post. Wonderful to know that even Howard Pyle needed to pick up quick jobs before the Holidays.