The Fox, the Monkey, and the Pig

Howard Pyle most likely wrote and illustrated the following fable in November or December 1876 and it appeared in the September 1878 issue of St. Nicholas Magazine for Boys and Girls. The delay was not unusual for the magazine: another fable written at the same time wasn’t published until December 1885. Pyle's original 4.8 x 7.6" ink drawing, like so many others from this period, is at the Delaware Art Museum.


The Fox, the Monkey, and the Pig

The fox, the monkey, and the pig were once inseparable companions. As they were nearly always together, the fox’s thefts so far reflected upon his innocent associates, that they were all three held to be wicked animals.

At length, the enemies of these three laid a snare, in a path they were known to use.

The first that came to the trap was the pig. He viewed it with contempt, and, to show his disdain of his enemies and his disregard for their snare, he tried to walk through it with a lofty tread. He found he had undervalued it, however, when, in spite of his struggles, he was caught.

The next that came was the monkey. He inspected the trap carefully; then, priding himself upon the skill and dexterity of his fingers, he tried to pick it to pieces. In a moment of carelessness, however, he became entangled, and soon met the same fate as the pig.

The last that came was the fox. He looked at the snare anxiously, from a distance, and, approaching cautiously, soon made himself thoroughly acquainted with its size and power. Then he cried, “Thus do I defeat the machinations of my enemies!” - and, avoiding the trap altogether, by leaping completely over it, he went on his way rejoicing. 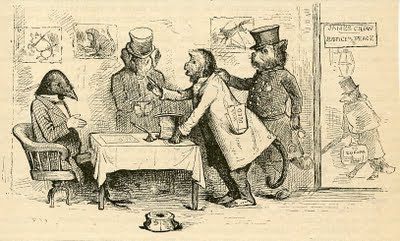 Posted by Ian Schoenherr at 5:23 PM