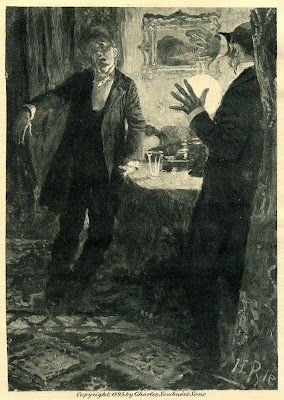 Even though quite a few of Pyle’s pictures are set in “modern” times (i.e. circa 1865-1911), they tend to be eclipsed by his historical and fantasy work. But this one has all the earmarks of his best and better-known pieces: a riveting, yet dynamic composition; fine detail (where needed) that gives way to looser, more evocative brushwork; great chiaroscuro, tension, drama; and it leaves plenty to the imagination while perfectly complementing the passage it illustrates:

He put the glass to his lips and drank at one gulp. A cry followed; he reeled, staggered, clutched at the table and held on, staring with injected eyes, gasping with open mouth; and as I looked there came, I thought, a change - he seemed to swell - his face became suddenly black and the features seemed to melt and alter - and the next moment, I had sprung to my feet and leaped back against the wall, my arms raised to shield me from that prodigy, my mind submerged in terror.

“O God!” I screamed, and “O God!” again and again; for there before my eyes - pale and shaken, and half fainting, and groping before him with his hands, like a man restored from death - there stood Henry Jekyll!

It reminds me (in a twisted way) of Vermeer’s “The Artist in His Studio” - the heavy drapery at one side, the framed picture (as opposed to a map) on the back wall, the placement and lighting of the cluttered table, the almost photographic “presence” (for want of a better expression) - though Pyle’s is more of a snapshot whereas Vermeer’s is a large format studio portrait.

It was published in Volume Seven of The Novels and Tales of Robert Louis Stevenson (New York: Charles Scribner's Sons, 1895). The reproduction is a tiny 2.9 x 4.1" and the original oil on board is 11 x 15.6" and can be seen at the Delaware Art Museum.
Posted by Ian Schoenherr at 5:08 PM