The Dance of the Veterans 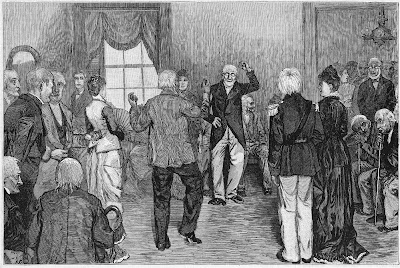 “The Dance of the Veterans,” an unsigned wood engraving measuring 9.2 x 6.1 inches, appeared in Harper’s Weekly for July 26, 1879. The credit reads “Drawn by Howard Pyle from a sketch by Louis Joutel.”

Just as a few of Pyle’s early magazine contributions were redrawn by more experienced illustrators, here Pyle seems to have done the same for the young artist and entomologist, Louis Hippolyte Joutel (1858-1916). While it is difficult to tell where Joutel ends and Pyle begins in this piece, the treatment of the peripheral characters in particular is consistent with Pyle’s style of the late 1870s and early 1880s.

Here is the text which accompanied the picture:

Among the pleasant incidents of the National Holiday was the reunion of the surviving veterans of the war of 1812 at the Sturtevant House, in this city [at Broadway and 29th Street, New York]. Eight deaths during the past year have reduced the venerable band to fourteen, consisting of the following gentlemen: General Dally, commander of the corps, aged eighty-five; Charles Coombs, aged eighty-eight; Jacob Van Nostrand, aged eighty-six; William Tway, aged eighty-one; Thomas Megson, aged eighty-one; George Crygier, aged eighty-six; David Lopez, aged ninety-one; Barnabas Allen, aged eighty-seven; Samuel Ryckman, aged eighty-seven; Parmenas Doxey, aged eighty-eight; Elijah P. Jenks, aged seventy-eight; Thomas Stewart, aged eighty; Gardiner P. Lillibridge, aged eighty-seven. The adopted Adjutant of the corps is Mr. J. Gould Warner, a young man of about fifty. Among the visitors on this occasion were John Scott, a Continental soldier, “presumably,” says the New York World, “one hundred and twenty, but as sprightly as any of the other boys,” and Miss Sarah Scott Stafford, aged seventy-eight, a daughter of Lieutenant Stafford, who jumped overboard and saved the flag of the frigate Bonhomme Richard, but received a cutlass wound while doing it that eventually resulted in his death. She brought the old flag with her, and a musket and sabre which belonged to her father.

After the generous repast provided by the Messrs. Leland, a quadrille set was formed in one of the reception-rooms. Major Crowley led Miss Randolph to the floor, followed by General Dally with Miss Berg, Mr. Coombs with Miss Dunn, and Mr. Lopez with Miss Smith. When the quadrille was over, Major Crowley and Mr. Coombs gave a stirring exhibition of how the foot used to be shaken in the good old days. This incident was seized by our artist as the subject for the illustration to be found on page 592.

At the conclusion of the dance tickets were distributed for the excursion the veterans are to have at Spring Hill Grove, on August 4, to raise money to maintain their down-town head-quarters another year, and the company separated.

Posted by Ian Schoenherr at 1:23 PM