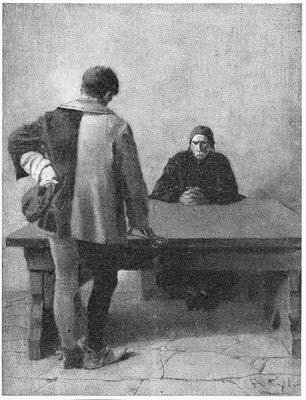 As a footnote to my post about Howard Pyle’s black and white oil painting for Men of Iron, I present the illustration as it appeared in Harper’s Young People for March 17, 1891. The 8 x 10.5" original has been reduced to 4.8 x 6.3" and it’s not the worst reproduction - especially for something mass-produced, ephemeral, and made so early in halftone’s history - but a grey mist has crept into the room and subtleties have been lost. Still, it’s good to remember that Pyle’s reputation was made, to a large degree, on mediocre reproductions like this.
Posted by Ian Schoenherr at 10:18 AM