Today is Mark Twain's 174th birthday - enough of a reason to talk briefly about his (or Samuel L. Clemens's) connection to Howard Pyle.

Of course, the obvious link is that Pyle illustrated Mark Twain's "Saint Joan of Arc" for Harper's Monthly (December 1904). When the magazine initially approached Pyle about the project, they wrote: "It may interest you to know that in [Clemens's] letter accompanying the manuscript he speaks of you as the one man in this or any other country who can make pictures for it." And when Harper's informed Clemens that Pyle had agreed to illustrate the piece, he replied, "I am glad that an artist rich in feeling & imagination is to make the pictures."

But Clemens was already a longtime admirer of Howard Pyle, the artist and the author. Back in early 1884, while staying with the Clemens family, George Washington Cable had noted, "Mrs. Clemens is reading aloud to Mark & the children Howard Pyle's beautiful new version of Robin Hood. Mark enjoys it hugely...." And on New Year's Day in 1903 (shortly after Pyle attended Mark Twain’s 67th birthday party in New York), Clemens reiterated his opinion: "Long ago you made the best Robin Hood that was ever written," and in the same letter he praised Pyle's new version of the King Arthur legends: "They were never so finely told in prose before. And then the pictures - one can never tire of examining them & studying them."

So, by way of a birthday present, here is Pyle's "She believed that she had daily speech with angels" from "Saint Joan of Arc" by Mark Twain. A beautiful thing. 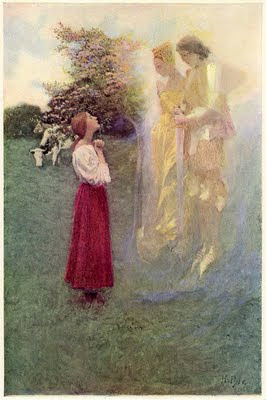 Posted by Ian Schoenherr at 4:09 PM